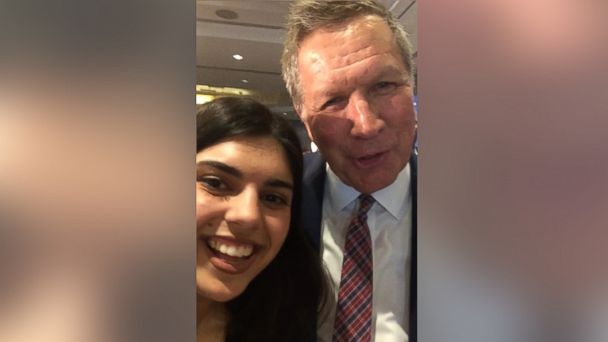 "Hey Nico, it would be 'Kay-sick' if you would go to the prom with Julia," the Ohio governor said in the video, intentionally mispronouncing his own name.

Julia Khan, the 17-year-old high school senior in the video, tweeted Kasich's "promposal" was successful. "He said yess!!" she wrote.

But neither Khan, from Los Altos, Calif., nor her date actually plan to vote for Kasich in California's GOP primary in June, she told ABC News. They are bigger fans of Democratic presidential frontrunner Hillary Clinton, she said.

"My prom date and I are both Clinton supporters," Khan, who lives in Los Altos, Calif., told ABC News. "So I guess it was just an opportunity to have a presidential candidate help me ask my friend to prom."

Kasich penned his own tweet in response to Khan's video, which was filmed on Friday after he participated in a town hall style-meeting in San Francisco. "That's great!" he wrote. "Have an awesome time!"

Kasch's video contribution did not actually clinch the deal, although it was fun to make, according to Khan. She and her date had already planned to attend the dance together later this month, she said.

Even though she plans to vote for Clinton, Khan said she appreciated that Kasich was still taking questions from voters in such an accessible manner. She said she asked a question about cybersecurity during Friday's event.

"This is my only shot to get an issues-based question answered by anyone on the Republican side," she said. "I have a lot of respect for Kasich."