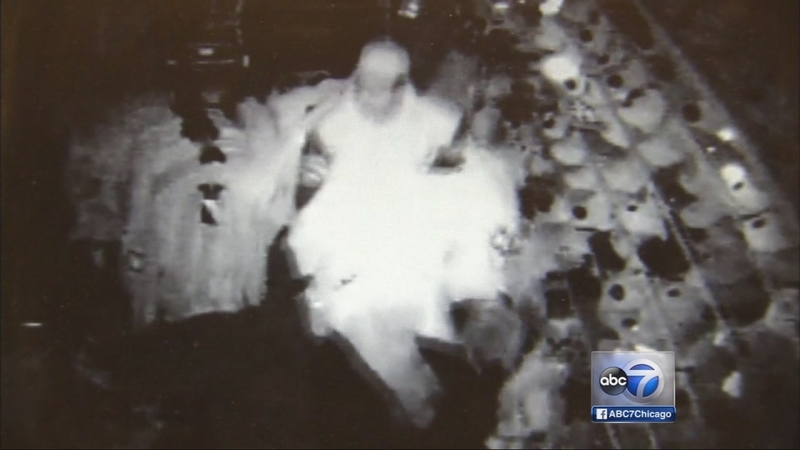 CHICAGO (WLS) -- Police are investigating a smash-and-grab burglary at a Blackhawks souvenir shop just a few blocks away from the United Center.

Surveillance video shows around 2:10 a.m. Tuesday, someone kicked in the front door to Gunzo's Sports Center, located in the 1500-block of West Madison Street on Chicago's Near West Side.

Investigators said the thief - dressed in a Blackhawks jacket - stole cash from the register and several Blackhawks sweatshirts that sell for about $100 each. The total loss is about $1,500.

"Didn't notice the apparel missing until a little bit later. Once we figured that out, we saw the hangers on the floor and figured they just took it off one giant rack," Markham said.

A woman who lives in the apartments above the shop said Madison is an extremely busy street and that it makes sense the thieves struck after midnight.

"We shop at Gunzo's all the time. We get all our jerseys and stuff here. They're wonderful people, so it's very surprising. There's a lot of foot traffic on Madison all the time. I'm going to work myself. I always feel safe. It's a great area," said Katie Oreluk, who lives nearby.

A neighbor said Gunzo's has been in the neighborhood for at least 10 years. The company has two other locations in the Chicago area: one in west suburban River Forest and another in north suburban Morton Grove.

The store's owner, Keith Jackson, is out of town this week.

"We still have real loyal following from the hockey community. The Blackhawks organization themselves are very kind to us. We have a real nice combination of amateur and professional followers," Jackson said.

From 1955 to 1961, Gunzo was the nickname of a Chicago Blackhawks backup goal tender and assistant trainer. In 1961, the Blackhawks won the Stanley Cup. Gunzo's name appears on the cup.