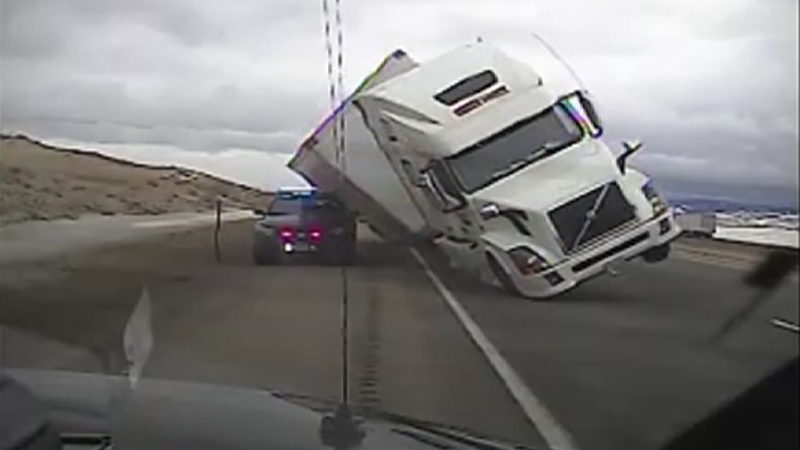 ELK MOUNTAIN, Wyo. -- It looks like a scene from the play room: a child smashes a truck into a much small car, leaving the latter a mangled mess.

Only, this really happened.

Luckily, the Wyoming Highway Patrol cruiser wasn't occupied Tuesday when reported gusts as strong as 90 miles an hour knocked a semitrailer onto it near Elk Mountain. The wreck was caught on police dash camera video.

"The tractor trailer was traveling at a very reduced speed, 30 to 35 miles per hour," Lt. David Wagener of the highway patrol told CNN. "A gust got the trailer and blew it onto the police car."

Interstate 80 was closed at the time to light-weight and high-profile vehicles, he said. The driver of the semitrailer ignored posted warnings.

No one was hurt, but the police car is presumed totaled.

"We were attempting to salvage as much equipment as we could," Wagener said. "They couldn't even get into the trunk initially to get equipment out."

Officials cited the semitrailer driver with a misdemeanor for traveling in a closed section of the interstate, he said.

The highway patrol released the video in hopes that people get the message: heed high-wind advisories.

"You never know whose life you are putting in danger -- including yourself," Wagener said.

Just weeks ago, high winds knocked a semitrailer onto another Wyoming Highway Patrol vehicle. An officer in the vehicle at the time sustained minor injuries.