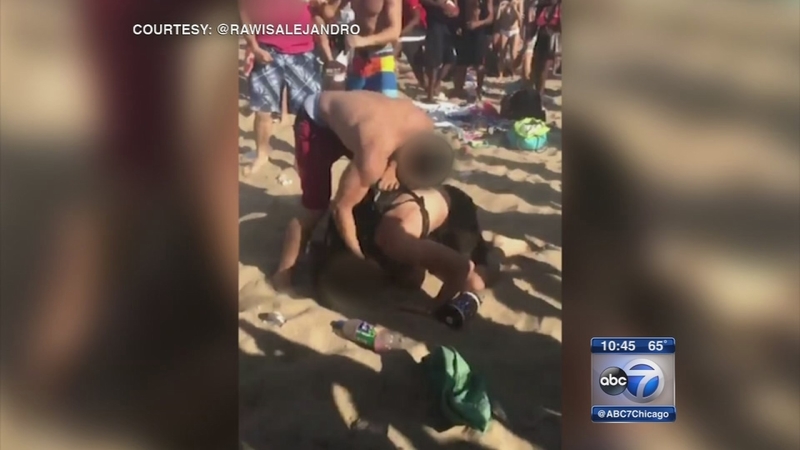 Alejandro Contreras, who witnessed the melee, posted a video on Twitter. He said he doesn't know who was involved or why the fighting started.

"Just a bunch of hands flying everywhere," Contreras said. "I didn't even know who was fighting. It was just a bunch of random people going at it...Seemed like a random melee going on."

Contreras shot video in the middle of the madness showing two guys going at it, one taking it on the chin before others piled on. What started the brawl is unclear.

"The word I would use is reckless," Contreras said. "Very reckless. Everyone out there was just wilding out for no reason, just being reckless."

Danielle Lueck said she left North Avenue Beach minutes before the chaos, but saw video of the brawl.

"Definitely a lot of underage drinking," she said. "Crazy. All these very young kids dancing, drinking, smoking weed...It was terrible, honestly. And the police were here, but they can only do so much when there's that many people."

The huge crowds left a mountain of trash.

As the sun set on Memorial Day, police were seen urging beach-goers to head home.

Police were back at the beach Thursday night, but some wonder if it could happen again.

"I probably won't come to North Avenue Beach," Lueck said. "My friends ended up going further up north and said it's fine up here. So I may stay away from this area."

Police said they increase beach patrols every summer, but they have no plans to put additional officers here as a result of that fight on Memorial Day.