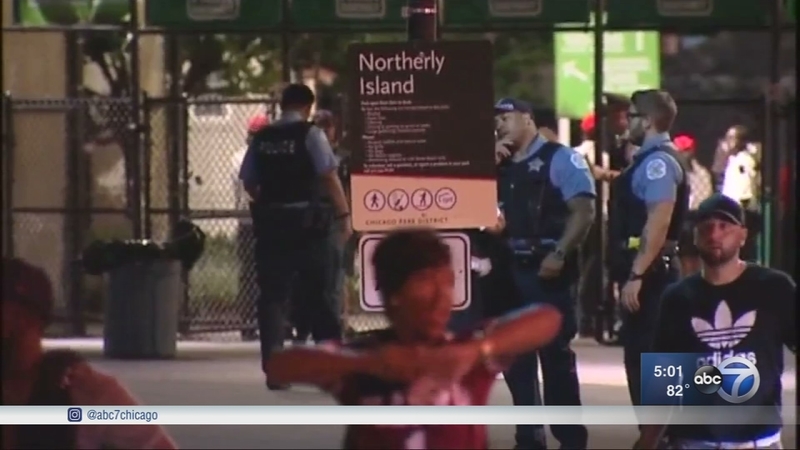 CHICAGO (WLS) -- Two people were stabbed Tuesday night during a fight at a Dropkick Murphys and Rancid concert at Chicago's Northerly Island.

At about 9:30 p.m., a 34-year-old woman and a 29-year-old man got into an argument with another near a concession stand inside the Huntington Bank Pavilion, police said. The confrontation spilled into the venue. Then, someone pulled out a knife, investigators said.

The male victim was stabbed in the neck and face. The female victim had a cut on her stomach. Both were taken to Northwestern Memorial Hospital. A man was taken into custody.

"They started fighting basically and next thing I know, I see blood pouring everywhere and the guy threw an object which I assume was a knife because the guy was bleeding so bad. Security came and arrested him," said concert-goer Dreanere, who did not give his last name.

Fans said they went through security checkpoints before going inside the venue, so it's not clear how the suspect managed to sneak a knife inside.
On Wednesday, Chicago Park District General Counsel Tim King was demanding answers from Monterrey Security, the firm hired by LiveNation to handle security at Northerly Island.

King questioned how anyone could manage to sneak a knife into a concert at Northerly Island when Monterrey Security guards are supposed to use metal-detector wands to screen concert-goers before they enter the popular venue.

Unlike bigger venues, such as the United Center or Wrigley Field where magnetometers are used, security at Northerly Island uses handheld wands to screen concert-goers.

"We're working with LiveNation and police to try to get to the bottom of it. We have to find out what the heck happened," King said Wednesday. "Any time somebody gets injured at a Park District event, it's of utmost concern. Did somebody sneak in a knife in their shoe or throw a knife over the fence? We're still piecing it together. And if we need to improve security, we will to make certain it's a completely safe environment."

King said LiveNation and its security sub-contractor, Monterrey, are working under terms of a ten-year deal "re-upped" four years ago.

The contract requires the venue manager to maintain "adequate security," including using those detector wands to check all concert-goers for guns, knives or other weapons, King said.

"We keep it vague because tomorrow, industry standards may require bomb-sniffing dogs or a device to detect bomb-making residue on a person's fingers. It all depends on what's going on in the world," King said.

In a statement, LiveNation said: "We are reviewing our search procedures and working with the Chicago Police Department to better understand the circumstances surrounding the incident and to ensure that we are following the most appropriate security practices at the venue."

Juan Gaytan, the former Chicago Police officer who owns Monterrey Security, could not be reached for comment.

Monterrey has been at the center of controversy for years because of its parade of government contracts, including Soldier Field security.

In 2001, the company was slapped with a $22,000 fine by state regulators - and placed on two years' probation - for operating for 21 months without a state license.

A man and a woman were stabbed Tuesday night at a concert at Northerly Island.