Between 15 and 20 good Samaritans tried to lift the cab off the victims after the crash.
WABC 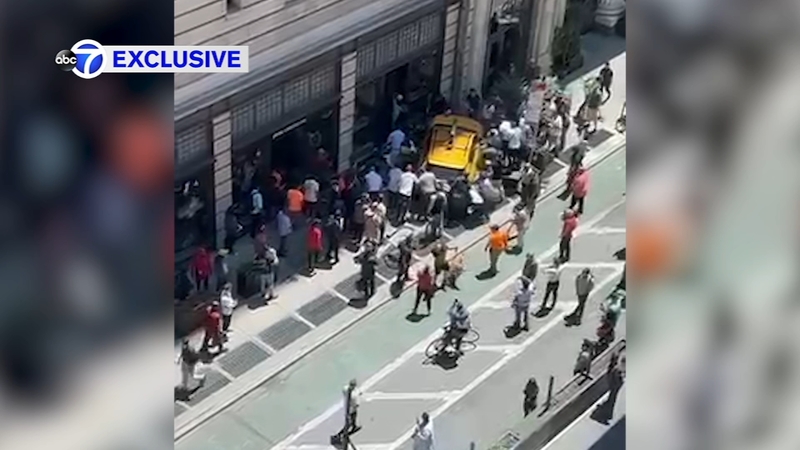 NEW YORK CITY -- Six people were injured when a taxi struck a bicyclist, jumped a curb and plowed into a group of pedestrians in New York City Monday afternoon.

It happened just before 1 p.m. on Broadway at 29th Street.

Authorities say the cab was westbound on 29th Street turning left onto Broadway when the driver collided with a bicyclist in the intersection.

The driver then careened onto the sidewalk, mowing down several pedestrians and pinning two women underneath the vehicle.

In what NYPD Deputy Police Chief John Chell called a "remarkable scene," between 15 and 20 good Samaritans tried to lift the cab off the victims.

Our sister station WABC-TV obtained exclusive video of that effort. Watch it in the video player above.

Two of the victims were in surgery Monday evening with leg injuries and are in critical condition, but the NYPD says their injuries are not life-threatening.

Of those two victims, one is from Mexico and the other is from Ohio. Four other victims have minor injuries.

The 60-year-old cab driver, who remained at the scene, also had minor injuries and is not one of the victims in surgery.

Six people were injured when a taxi jumped a curb and plowed into a group of pedestrians in Midtown Manhattan Monday afternoon.

Police officials believe the driver did not have a medical incident but said the investigation is ongoing.