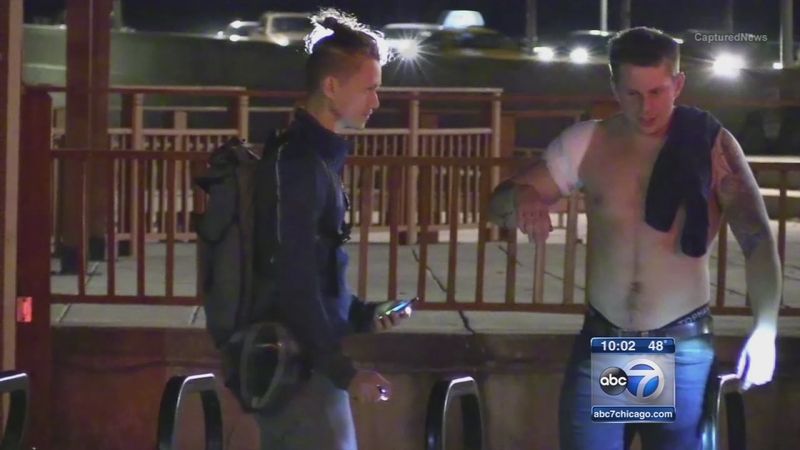 Neil McCarthy, 27, and his girlfriend got more excitement than they expected after he was stabbed as the couple was robbed near Oak Street Beach. The couple had come to Chicago from Minneapolis for a weekend getaway.

"I was away and trying to find help, and yelling for anybody to come help," Carisa Lerner said.

It was Saturday night around 11:50 p.m. and after the couple ate pizza at Navy Pier, they decided to take a walk along the lakefront as they made their way back to their Mag Mile hotel.

The trouble began as they neared the underground tunnel near 1100-block of Lake Shore Drive they saw three guys.

McCarthy says he handed over his money, wallet and cellphone. That's when one of the robbers began to shake down Lerner for her valuables. That made the former Royal Air Force member angry.

"He wanted cash and I had already given him my credit cards and I tried to explain to him that I don't carry cash," Lerner said.

McCarthy then jumped the thieve going through her pockets.

"The guy with the knife and the other guy came over, went to stab me, turned for some reason, oddly, and so I just went for him to try and get the knife," said McCarthy. "He got me in a kind of headlock. He stabbed me in the shoulder, which is a terrible thing to happen, on a holiday. I got the knife and just defended myself from the three guys that were punching me."

Lerner yelled for help and the suspects ran off as the police and an ambulance showed up.

Then something strange happened as the couple tried to find their cellphone. One of the attackers appeared and McCarthy chased him down, tackled him and held him for police.

Police say they have an 18-year-old man in custody. He has been arrested but not yet charged as of Sunday evening.

McCarthy was eventually treated at area hospital. The couple says despite their ordeal, they still would come back to Chicago and hope talking about the attack will help others.