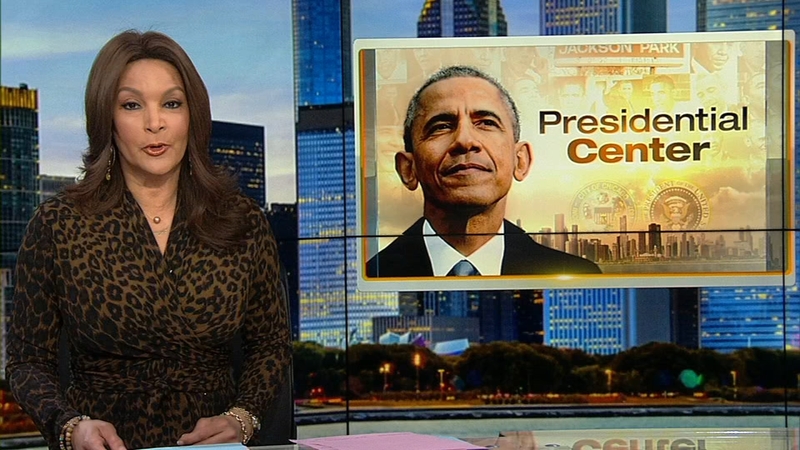 Aldermen stand and applaud after Obama Presidential Center is approved. Mayor @ChicagosMayor says he will make his comments short because he has to take a call from President Obama. @ABC7Chicago pic.twitter.com/nEdGpYGfZ8

"I usually put these vote tallies on my desk underneath the glass. And I actually asked for two because the president also wants one to be done so he would have also the recorded vote where the city of Chicago made history," Emanuel said.

The mayor's office said the approval was a "giant step toward creating a living testament to the Obama legacy and an economic, educational and cultural engine in the South Side of Chicago."

"Like the World's Fair in 1893 - where 27 million people came to the city and spent their money - millions and millions of people will be coming to Chicago to spend their money, to stop in the stores, to eat in the restaurants. So it's a win-win for the city of Chicago," said Louis McCurry, Jackson Park Advisory Council.

The lone "no" vote was from Alderman David Moore (17th Ward). He said he favors the center coming to Chicago, but is concerned about how the city can afford the $175 million for infrastructure costs while some of his constituents struggle getting street improvements.

The Center that would close Cornell Drive and erect three buildings between 60th and 62nd on the west side of Jackson Park, has others concerned about how the development may impact housing. Some critics of the proposed project wanted the Obama Foundation to sign a Community Benefits Agreement.

Chance the Rapper tweeted Wednesday: "I'm excited for the Obama Presidential Library but if there's no Community Benefits Agreement, if City Council won't hear the residents of Woodlawn and Southshore, it ruins the legacy and puts folk at risk #ObamaCBA"

I’m excited for the Obama Presidential Library but if there’s no Community Benefits Agreement, if City Council won’t hear the residents of Woodlawn and Southshore, it ruins the legacy and puts folk at risk #ObamaCBA

Mayor Emanuel takes a call from Mr. Obama after the City Council signs off on the Obama Presidential Center. Hear it for yourself.... pic.twitter.com/DvMRZmr1Lq

The Obama Foundation thanked the mayor and City Council for their support in a statement released Wednesday:

"We thank Mayor Emanuel and the City Council for their support as we take another significant step forward in bringing the Obama Presidential Center to Chicago's South Side. Following today's vote, we remain committed to continuing the conversation with our neighbors and community across Chicago on how we can build an OPC that fulfills President and Mrs. Obama's vision: a museum that tells their story and celebrates the people and events that led to this historic presidency, a gathering place that benefits the entire community, and a home for civic engagement that inspires visitors to create positive change."
Progress Chicago Executive Director Sam Hobert also supported the council's decision in a statement released Wednesday:

"The Obama Presidential Center will have a tremendous impact on our city, generating immense economic, cultural and educational benefits for the people of this city and for visitors from all over the world. Estimates indicate that the library center will create about $3 billion in economic gains over the next decade, including thousands of new jobs for our community. With today's vote, we are moving one step closer to bringing to life the President and First Lady's vision for a living, working campus devoted to active citizenship that will establish Chicago's South Side as a global destination for thought leadership and activism."

The zoning committee gave its stamp of approval Tuesday for the proposed 19.3-acre site along the western edge of Jackson Park.

The Obama center is expected to generate 700,000 annual visitors and more than $3 billion in economic development. But it has received plenty of pushback from residents concerned about displacement and infrastructure costs.