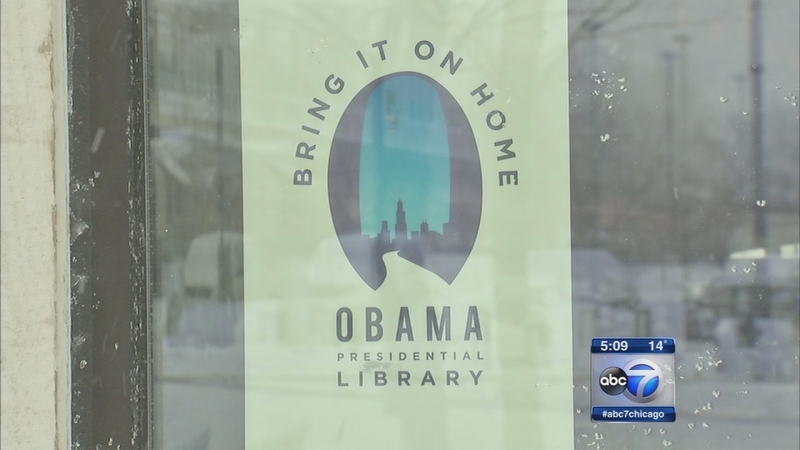 CHICAGO (WLS) -- The snow packed fields of the South Side's Washington Park lie dormant. But the possibility of new life looms ahead as a decision is made about the location of the Obama Presidential Library and Museum.

The foundation developing the future facility commissioned polling in Chicago to determine whether residents support building it on the South Side. The complete survey was not released, but what was shared seems to lean in favor of a strong pitch for a presidential library in the area.

Two Chicago schools and one each in New York and Honolulu are in the running for the library and presidential museum, and Obama is set to pick a winner within weeks. Most recently, the focus has shifted to the University of Chicago's bid - and a public spat with a conservation group over the school's proposal to build on city park property.

But the South Side residents who spoke with ABC7 Eyewitness News say they want to see the area selected out of the possible locations.

"You go through some of these neighborhoods, and the homes were so beautiful at one point, and you could possibly regenerate that and bring in new life," said Rick Ortiz, South Side resident.

Others who reside in the area say they agree.

"There's a lot of other change going on right now and change like the library could be beneficial," said Skylar Moran.

"We help put him where he is today, you know Chicago did it so we deserve it. We worked hard for him so he can work hard for us," said Sandra Bivens, 51st Street Business Association.

At the City Club of Chicago, panelists dove into the selection process, sharing that the White House is giving the Obama Presidential Foundation guidance on the location.

They said the recent study shows keen interest in the South Side sites, which are both public parks. But a small but outspoken group of opponents, led by the nonprofit Friends of the Parks, argues that officials have yet to prove the future library is worth the land-grab from city park-goers.

"It is based on a series of false narratives and we are going to conduct our own study that has fairly worded questions," said Cassandra Francis, Friends of the Park.

"The poll confirms what we heard from the people who came before us to speak," said Avis Lavelle, Chicago Park District.

During the City Club discussion, Francis made a comment that rubbed some the wrong way. She said that putting more museums in public parks could set a precedent, and Dennis Rodman would be looking for a museum soon. She later said she was trying to get people's attention on the topic by being funny.

A decision on the library is expected next month.