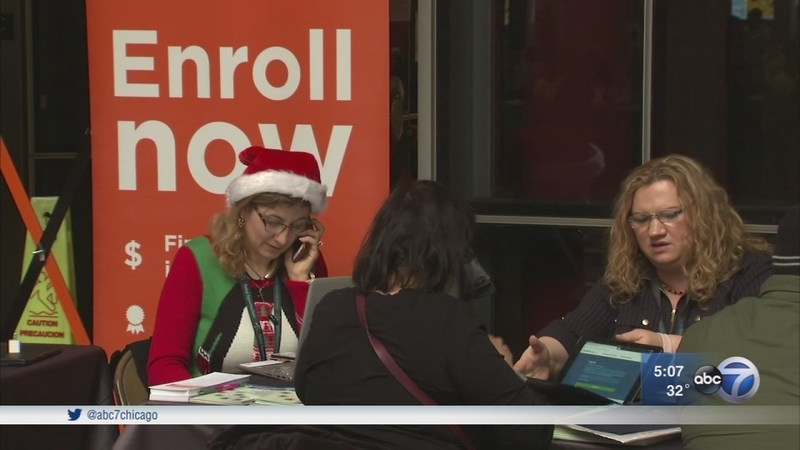 NEW YORK (WLS) -- Time is running out to sign up for Obamacare for 2018. Open enrollment ends at 10:59 p.m. CST on Friday, December 15, for Illinois residents. Use the federal exchange, healthcare.gov, to sign up online.

With only a few hours left if to sign up for insurance under the Affordable Care Act, Illinois offered last-minute help Friday.

The ACA, or Obamacare, as it is more commonly referred to, remains under fire in Washington. One of the casualties is the enrollment period, which was cut short this year from 90 to 45 days. So, those needing coverage have until 10:59 p.m. Chicago time to get signed up.

Colette Scaletta was hoping it would be a lot simpler to get a policy changed for her son so the hospital nearest their home would be on his plan.

"Since my son is an adult now I am unable to make the change, so I had to wait for him to get back from college to come down and physically make the change," said Scaletta.

But she, like many others are up against Friday's deadline, with a lot to consider.

"And it's important that folks don't just shop on price, you might want to consider what kind of provider, what kind of hospital, what kind of services or what kind of usage you may be looking for," said Brian Gorman, Director of Public Education for Get Covered Illinois.

That's why the state is providing assistance. Enrollment is up 17 percent this year despite concerns about changes that President Trump is trying to make to Obamacare. Sen. Dick Durbin said people can't lose their insurance.

"They will be covered next year, if they sign up this year. Because the insurance policies that are being offered and the terms of the insurance are going to be enforceable for a year," said Sen. Durbin, (D) Illinois.

Marquis Howard missed his employer's sign up deadline and now has to get insurance on his own.

"My biggest question is the cost concerns and just the exact quality of what I will be getting," said Howard.

Many people have been asking questions about penalties if they don't sign up.

"And another common question they ask if they will have financial help available for them. Financial help is still available if you qualify. It goes by your household income and how many people in your house," said Syuzanna Bradford, Enrollment Coordinator at the Patient Innovation Center

"But the real risk is that they may go the full year without insurance. We all know that we're all just one accident away from potentially getting bankrupt," said Gorman with Get Covered Illinois.

People who were signed up for a plan last year will automatically be re-enrolled, but the state is encouraging people to double check their coverage and still look at options that could be cheaper for them.

The fines for those who don't sign up are $695 or 2-percent of your salary.

More people have signed up for policies than at this time a year ago, but Obamacare supporters fear that many potential enrollees may not realize that the Trump administration cut the sign-up season in half. In fact, 56% of those consumers shopping online for health insurance at eHealth said they are unaware that open enrollment ends Friday, the insurance marketplace said this week.

There is one exception: Those who live in areas affected by hurricanes -- such as Florida -- can qualify for a special enrollment period, which will give them until the end of the year to sign up.

The federal exchange has been sending emails daily to some consumers warning them of the looming deadline. But the Trump administration ended television advertising, which advocates say was the most effective way to get people to enroll in time.

Some 4.7 million Americans selected policies on healthcare.gov through December 9, according to federal data. That's about 650,000 more sign-ups than at a similar point last year, according to Get America Covered, an advocacy group aimed at promoting open enrollment.

A flood of procrastinators is expected to pick plans this week. Visits to healthcare.gov soared on Thursday, hitting its highest point at midnight, Get America Covered said. And on Friday morning, people calling for help had to wait 30 minutes for a representative.

"The surge is real," said Lori Lodes, the group's co-founder and a former Obama administration official.

In prior years, consumers who started the enrollment process before December 15 -- the deadline to get coverage at the start of the new year -- were given a little more time to complete their applications. The Trump administration announced late Friday that it will do the same this year.

Even with the last-minute rush, it's unlikely that total enrollment will match last year's figure of 9.2 million.

Those in states that run their own exchanges may have more time to sign up. California and New York, for instance, have extended enrollment through January 31. Some 3 million people signed up for 2017 policies in state-based exchanges last year.

States have reported brisk activity in recent days. Maryland extended its deadline to accommodate the crowds.

"While enrollments have been very strong so far this year, we want to ensure that everyone in Maryland in need of 2018 health coverage has additional time to shop and enroll," said Howard Haft, interim executive director for the Maryland Health Benefit Exchange, which extended open enrollment to December 22.

Many of those signing up for coverage are new to Obamacare.

More than 182,000 new consumers have signed up for coverage in California, as of December 13. That's about 17% more than last year. Some 40,000 Washington residents picked plans for the first time, an increase of 47% from a year ago.

On the federal exchange, the number of new consumers is up about 14% from last year to just under 1.4 million.

Current Obamacare enrollees who want to remain on the individual market should go to healthcare.gov to view their options and actively select a plan. If they don't, they will be automatically re-enrolled in their same policy. In previous years, this happened well before open enrollment ended so people could select another policy. But this year, they will not be able to switch plans since the enrollment season will have already ended.

Some 2.2 million people were automatically re-enrolled through healthcare.gov last year.

Those who shop around may find they can snag much cheaper plans. Premiums have soared for 2018, but so have federal subsidies.

Some 80% of enrollees will be able to find a policy for $75 a month or less -- up from 71% this year and the highest share so far, according to federal data.