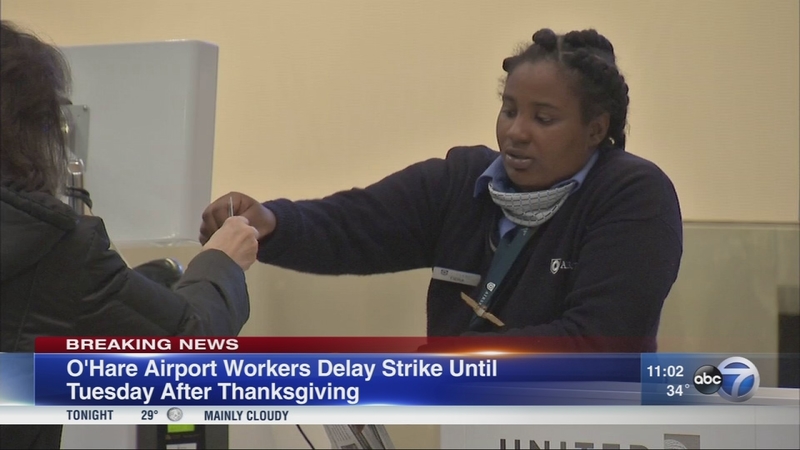 CHICAGO (WLS) -- Workers at O'Hare Airport have announced Monday that they won't go on strike until after the Thanksgiving holiday.

Thousands of baggage handlers, cleaners, wheelchair attendants and security officers employed by private contractors are expected to walk off the job on Tuesday next week.

The workers said they do not want to disrupt families and passengers traveling for Thanksgiving and they want as much public support as they can get. They are fighting for $15-an-hour wages and better working conditions and the right to unionize.

Workers said they do a lot of work for little money and they struggle to make a living. Raquel Brito, 21, is a baggage handler and makes $11.50-an-hour. She says he lives paycheck to paycheck, barely able to support her family.

"I'm out here speaking and fighting for my family and our future. United (Airlines) needs to take responsibly and standup for good wages at O'Hare," Brito said.

The workers are supported by the SEIU and the Fight for $15 campaign. Nationwide protests are planned for the Tuesday after Thanksgiving at about 20 airports.

Passengers said they are ready for what's to come.

"I think they deserve it. They do a lot of work and all of our luggage personal possessions are in their hands, so I don't want anybody stealing anything because they aren't making enough money," said passenger Trevor Black.