WLS
By Chuck Goudie, Eric Horng and Will Jones 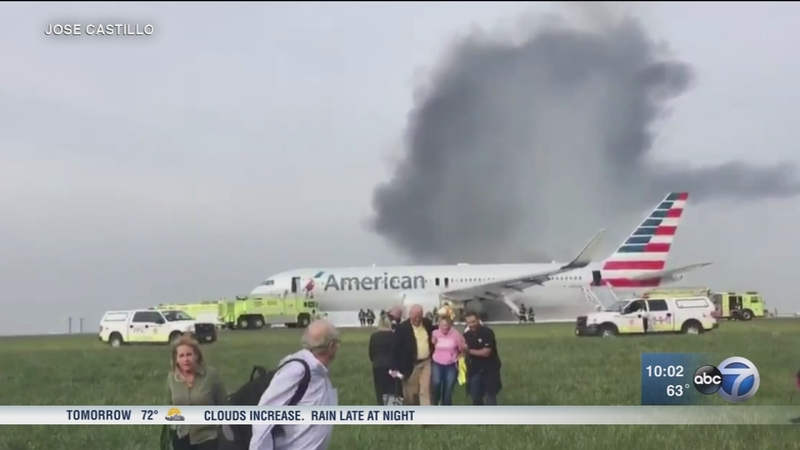 District Chief of EMS for O'Hare Juan Hernandez said 20 people had been transported to local hospitals with minor injuries including bruising, scrapes and ankle injuries sustained in the evacuation of the plane.

American Airlines flight 383 bound for Miami was forced to abort takeoff at about 2:35 p.m. The pilot heard a thump and thought a tire had blown. The air traffic control tower alerted the pilot to flames. A large fire quickly consumed the plane's right-side engine and wing. Flight crew immediately stopped the plane and evacuated it using the inflatable slides on the left hand side of the aircraft.

Federal officials said the cause of the fire was "uncontained" engine failure, meaning pieces were blown out of the engine. It is possible that scraps of a blow tire had been sucked into the turbine, causing the engine to break apart and ignite spilling fuel but investigators have not confirmed that.

Sampey said the fire was mostly extinguished quickly, but crews are still working to put out hot spots on the plane. The plane was carrying 43,000 lbs. of fuel at the time.

"This could have been absolutely devastating if it happened later, if it happened farther. There's about a thousand variables but again, they brought the aircraft to a halt, the air tower did a great job communicating to the pilot what fire they saw and they got everybody off the plane immediately," Sampey said.

Patients were taken to Lutheran General Hospital, Community First Hospital and Presence Resurrection Medical Center. Of the 20 people taken for treatment, eight have been treated and released Friday night.

Peter McLoyd and his wife Kathleen were both taken to Presence Resurrection for treatment.

The couple were injured as they evacuated the plane.

"She took a tumble as soon as she hit the tarmac, but I was able to avoid her. But the person who came after me crashed into her which created some injuries," he said.

Even with their injuries they're thankful they and everyone else on board survived.

We’re taking care of our passengers and crew on flight 383 at @fly2ohare. For updates: https://t.co/LS0P7po3ap

The National Transportation Safety Board have taken over the investigation. The plane will remain on the runway until the NTSB is finished with their on-site investigation.

Sampey said in his estimation it's been about eight years since an incident equivalent to this occurred at O'Hare.

One runway remains closed at O'Hare. Operations at the airport are normal. Investigators from the National Transportation Safety Board are on their way to O'Hare Airport s of 4 p.m.

ABC7 Doppler 7 MAX picked up the smoke plume from the plane fire on radar.

The smoke plume from the plane fire at O'Hare Airport was captured on radar by Doppler 7 MAX.