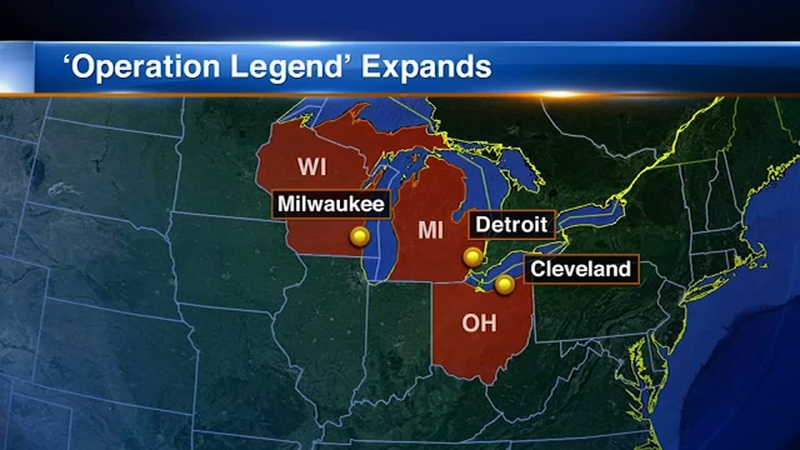 RELATED: President Trump sending 'hundreds' of federal agents to Chicago as part of anti-violence effort; Mayor Lightfoot says focus will not be protesters

The Department of Justice will send federal investigators to Milwaukee, Detroit and Cleveland in the coming weeks, according to officials.

Attorney General William Barr has directed agents from the FBI, U.S. Marshals Service, DEA and ATF to join local officials in fighting violent crime; 25 agents will go to Cleveland, 42 to Detroit, and 25 to Milwuakee.

"The most basic responsibility of government is to protect the safety of our citizens," Barr said. "Today, we have extended Operation Legend to Cleveland, Detroit, and Milwaukee, three cities that have seen disturbing increases in violent crime, particularly homicides. For decades, the Department of Justice has achieved significant success when utilizing our anti-violent crime task forces and federal law enforcement agents to enforce federal law and assist American cities that are experiencing upticks in violent crime. The Department of Justice's assets will supplement local law enforcement efforts, as we work together to take the shooters and chronic violent criminals off of our streets."

Three people have been charged with federal offenses as part of "Operation Legend," according to the U.S. Attorney's Office.

Last week, President Trump announced he was sending more than 100 additional federal agents to Chicago as part of Operation Legend.