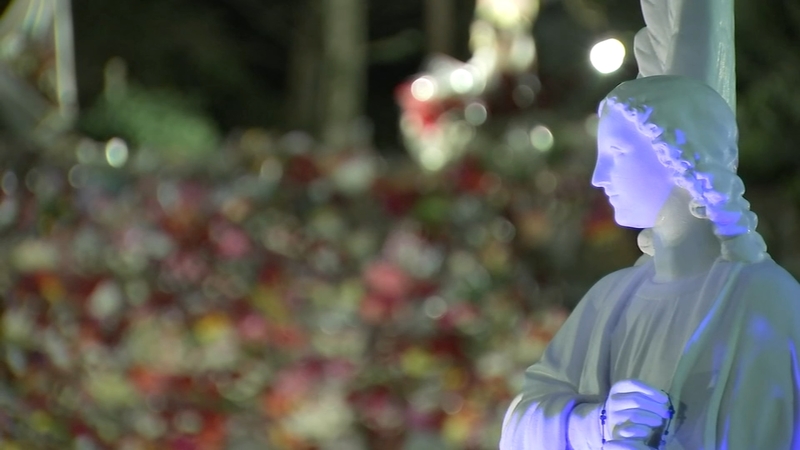 Thousands celebrate Our Lady of Guadalupe at Des Plaines shrine

DES PLAINES, Ill. (WLS) -- Thousands more people flocked to the shrine of Our Lady of Guadalupe in Des Plaines Sunday to celebrate the day named for her.

It is the largest shrine in the United States. While the celebration basically began Saturday at noon and just continued on, more and more pilgrims made their way to the shrine for midnight mass and then Sunday morning's official kickoff.

The celebration traditionally attracts hundreds of thousands of pilgrims, the vast majority of Mexican origin, not just from around the Chicago area but from around the country.
"It's very exciting to be here again and see all the traditions come back after all that year that we had," said Alma Zendejas.

La virgin de Guadalupe was serenaded with a rendition of Las Mañanitas birthday song in St. Joseph Chapel at 7 a.m.

Since then thousands of faithful have made their way through the shrine to offer the brown-skinned Madonna gifts of flowers, along with their prayers.

It is the largest celebration of its kind outside of Mexico City, which is where Catholic tradition says the Virgin of Guadalupe made her first appearance in front of a peasant boy named Juan Diego in 1531.

At the time, according to the story, Juan Diego's uncle was very sick and close to death. The virgin it is said, cured him. Today, Mexican Catholics venerate her.

Many of those at the shrine Sunday come on foot from near and far.

Last year's events were scaled back because of the pandemic.

"We're just honoring because we're still alive and it was a hard year but we came through it, so we're just being thankful right now," said Paola Almendarez.

"Virgencita gracias por otra oportunidad," thank you for giving me a second chance, reads a hand made over dress. The bearer and his family making the pilgrimage all the way from Los Angeles.

"She's my second mother because when we came from Mexico to here, I had problems in high school. I got in gangs," said Fernando Garcia. "So I start praying and praying, and I see the changes. So she helped me a lot."
"Juan Diego learned through trust in God, but also, that to begin to have a more positive outlook for the future, instead of the dark one, is part of the answer as well as seeking out remedies for our illnesses.," said Father Esequiel Sanchez, Shrine of Our Lady of Guadalupe.