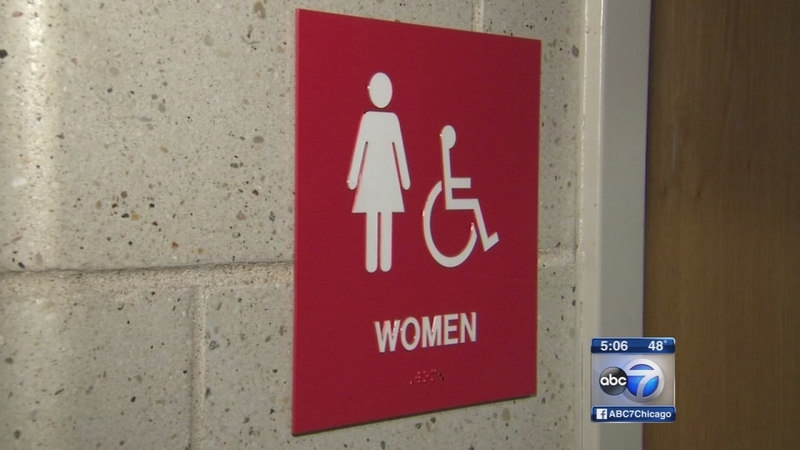 PALATINE, Ill. (WLS) -- Two conservative groups and a group of parents have filed a federal lawsuit against Palatine School District 211 against their accommodations for a transgender student.

The lawsuit seeks to stop the school district from allowing students to use restrooms ad locker rooms that match the gender they identify with.

The Alliance for Defending Freedom and Thomas Moore Society filed the lawsuit Wednesday, which was cosigned by 61 families and 136 individuals. With them at the Dirksen Federal Building were a group of parents passionate about protecting their children.

"We do sympathize with those who have difficult personal issues to deal with, to work through. But young men shouldn't be permitted to deal with those issues in intimate settings with young girls," said Vicki Wilson, a parent.

Parents in Palatine District 211 want to stop the district practice of allowing transgender students to use restroom and locker room facilities of the sex they identify with.

"There are common sense solutions that would protect the rights and dignity of all students in the school district. Allowing men into the restrooms and locker rooms of our daughters is not one of them," said one father who only wanted to be identified by his initials, T.W.

The lawsuit comes in the aftermath of a Fremnd High School student's civil rights complaint to the federal Department of Education demanding equal accommodation in sex specific settings such as locker rooms. The department indicated the original solution -- installation of some private curtains and stalls -- was not good enough, and threatened the loss of federal grant money under Title IX.

"Girls should never be forced to undress in the presence of young men -- it violates their right to privacy and harms their dignity," said Wilson.

The Illinois chapter of the American Civil Liberties Union thinks this is a publicity stunt.

"Your mothers have fought your grandmothers have fought for you to be able to choose what to be able to do with your body and not anymore -- now you have to show your body to people of the opposite sex, biological males, you get no say or choice in that matter and that is unconscionable," says Jocelyn Floyd of the Thomas More Society, a conservative pro-life law firm based in Chicago.

Title IX is the law outlawing sex discrimination in matters of academia. The Department of Education, through its Civil Rights Office, said any accommodations that are not equal of all other students is not following the letter of the law.

District 211 issued a statement Wednesday evening that said: "District 211 affirms and supports the identity of all our students. Last December, after lengthy deliberations, District 211 reached a highly publicized agreement with the Office for Civil Rights that provided workable solutions protecting the privacy and honoring the dignity of all students. The District has faithfully honored our agreement with the Office for Civil Rights and our students have shown acceptance, support and respect of each other. We have implemented the agreement without any reports of incident or issue. Individual changing stalls in our locker rooms are readily available to every student and further accommodations that provide even greater privacy remain available upon request."