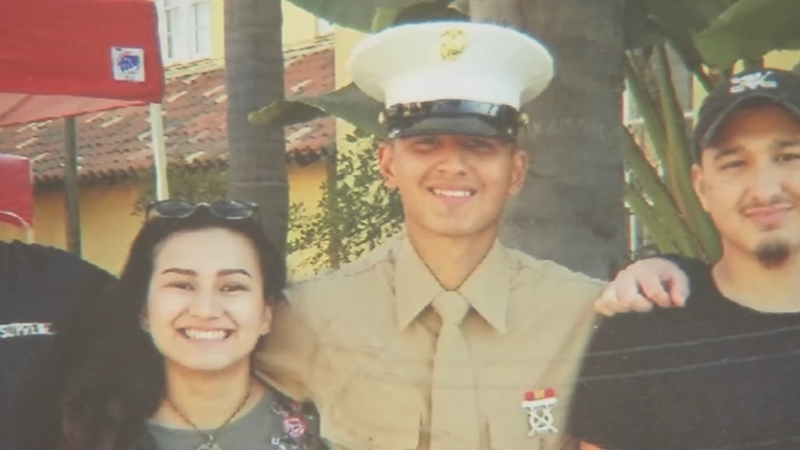 Marine from Palos Hills stabbed to death in Boston

CHICAGO (WLS) -- A Marine from Palos Hills died over the weekend after being stabbed by a bouncer at a bar in Boston.

Alvaro Larrama is charged in the death of 23-year-old Daniel Martinez. He appeared in court Monday and was ordered held without bail.

Apolonia Martinez said her son was enjoying life, traveling and catching up with friends, at the time of his death.

"This is the last shirt he wore before his trip," his mother said. "And I've been wearing it because it still has his cologne and it just, it gives me comfort. And his car, it's sitting in my garage. I just, everything's the way he left it. It's really hard."

Prosecutors say surveillance video shows Martinez trying to enter the Sons of Boston pub near the city's famous Faneuil Hall with a friend Saturday night. When he was denied entrance by the bouncer, they exchanged words and then Martinez walked away, prosecutors said.

"I finally let my guard down a little bit now that he was back, and it was a sigh of relief for me," she said. "I'm like, OK, he's home. My boy is home. Now I can just exhale, and then for this to happen, it doesn't make sense."

According to court documents, prosecutors say that after Larrama stabbed Martinez, he went back into the bar's kitchen where video shows he washed his hands, discarded his sweatshirt and knit cap, and turned his t-shirt inside out before fleeing the scene from a back door.

Martinez was born and raised in Chicago's Little Village neighborhood, went to high school in Northwest Indiana where his mother is, lived in Palos Hills with his father and was helping out with the family business, working at his family's funeral home in Chicago.