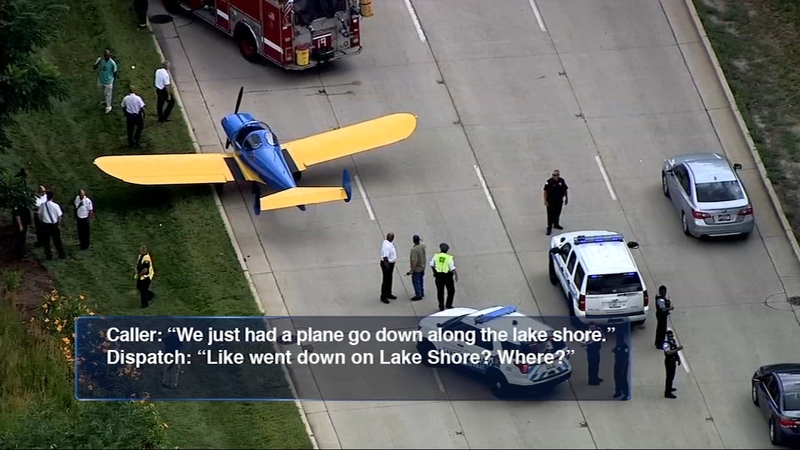 CHICAGO (WLS) -- The 911 calls made by shocked drivers as they watched a small plane land on Lake Shore Drive at the end of July have just been released.

The single-engine plane's pilot made a remarkable landing in the 3800-block of the southbound lanes of Lake Shore Drive on a busy Friday afternoon. In the calls, you can hear the shock and initial disbelief from both callers and dispatchers.

Caller: We just had a plane go down along the lake shore
Dispatch: Like went down on Lake Shore? Where?
Caller: Yeah, uh it was probably just south of Navy Pier

Dispatch: Did he land or is he landing?

When Chicago police contacted the fire department, at first there was a bit of disbelief.

CFD: No way. The phones would have been ringing off -- Well, actually we just got it
CPD: We're in the red so people are calling about it.

Several calls were made by drivers witnessing the event, concerned over why it was there in the first place.

Dispatch: Fire Department. How may I help you?
Caller: There was a plane it just crashed by 31st by the lakefront. Overpass, lakefront. A yellow plane.

Dispatch: A plane?
Caller: Yeah, a plane. An airplane.

Authorities said the plane flew under the 35th street footbridge as it landed in the southbound lanes.

Caller: It was a two-seater, single engine plane. It looks like it was coming down for a possible emergency landing.

The plane was traveling to Cleveland from Kenosha. There were no injuries, no damage and no roadside accidents. The only problem that day was the traffic.