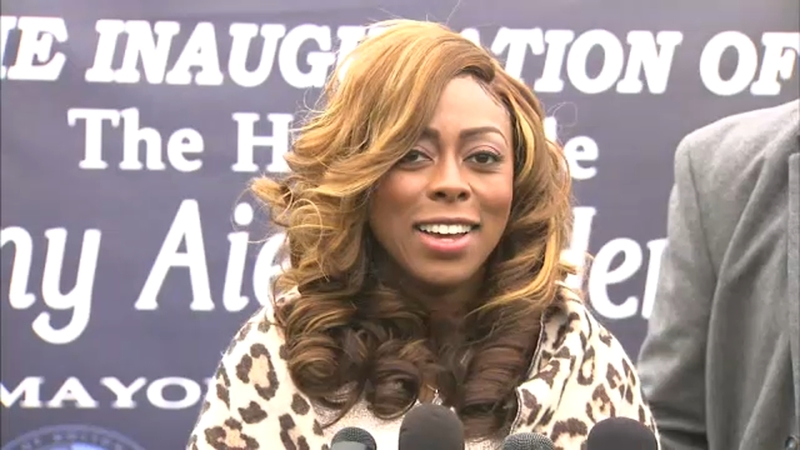 DOLTON, Ill. (WLS) -- The incoming Dolton mayor has big plans for the south suburban community after being sworn in Saturday.

Not only is she the first female mayor of Dolton, but also the youngest.

Tiffany Henyard, 37, who was born and raised in Dolton, ran on a campaign of change.

"Dolton residents, I am reporting for duty," she said as she was being sworn in this weekend.

She said she wants to focus on cubring crime and boosting the local economy.

One of her first moves includes appointing Chief Robert Collins, who resigned last year under the previous administration, as police chief.

"Crime has been on the rise for a long time in Dolton. I am bringing back Chief Collins. He is the new police chief - he has a new plan to fight crime," Henyard said.

"He is in charge of a fire safety plan to ensure that the fire hydrants are working," the new mayor said.

The 37-year-old single mom said she aims to bring transparency to the office, while focusing on business and job creation. She plans to use federal money to give out grants to local businesses in the coming weeks.

"We will appoint an economic development director and put them in charge of an economic plan for the village," Henyard said. "We need jobs"

Henyard was on the village board of trustees and is familiar with a complicated legal battle with the City of Chicago.

Back in 2018, Chicago sued Dolton over unpaid water bills. The lawsuit alleged that the village used money that was for water debt to buy other things.

"We owe $8 million to the City of Chicago. I want to sit down with the mayor to talk about that. Hopefully, she will forgive it. I can try," Henyard said.

She is on a mission to better the community and usher in a new era.

"I grew up with safe streets and I did not have any problems. It was a suburb," Henyard said. "I want to bring that back to Dolton."

She won a massive 82% of the vote on April 6, defeating challenger Ronnie Burge.