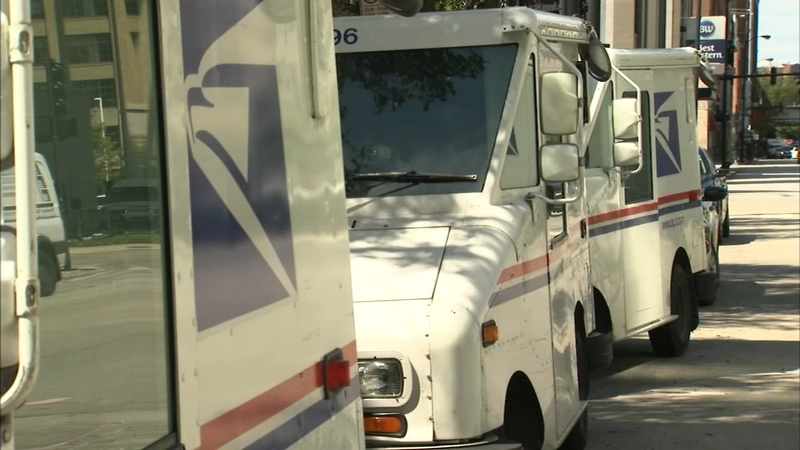 CHICAGO (WLS) -- U.S. representatives from Illinois visited the United States Postal Service Chicago Headquarters Tuesday amid ongoing concerns about mail delays and impacts on the 2020 presidential election, which will rely more heavily on mail-in voting than every before.

"This will, folks, be the year for mail in ballots for elections, more than ever in our history," Quigley said.

After weeks of complaints about USPS deliveries and, most recently, concern about the impact on the 2020 general election, Postmaster General Louis DeJoy announced he was rolling back the changes he had made, saying, "Retail hours at Post Offices will not change. Mail processing equipment and blue collection boxes will remain where they are. No mail processing facilities will be closed. And we reassert that overtime has, and will continue to be, approved as needed."

"Let's be really clear on what that means," said Rep. Sean Casten (D IL-6). "It means that he was lying when he said he had to do this. And why did it take this attention to get us to do that?"

"We have also seen significant service delays today. So, delaying any additional changes until after the election, while helpful, is not sufficient. We need to return to normal operations until after the pandemic," said Rep. Lauren Underwood (D IL-14)

Tuesday DeJoy announced that his office would suspend cost-cutting measures until after the November election.

RELATED: Any USPS cuts will wait until after the election, postmaster general says

"I came to the Postal Service to make changes to secure the success of this organization and its long-term sustainability. I believe significant reforms are essential to that objective, and work toward those reforms will commence after the election," DeJoy said in a statement. "In the meantime, there are some longstanding operational initiatives - efforts that predate my arrival at the Postal Service - that have been raised as areas of concern as the nation prepares to hold an election in the midst of a devastating pandemic. To avoid even the appearance of any impact on election mail, I am suspending these initiatives until after the election is concluded."

The @USPS is a public service for the American people & has been since our Founding. For years, the Postal Service has faced delivery problems, but these mail delays are especially concerning for our seniors & rural communities in #IL16. The issue needs to be resolved swiftly.

Election officials are expecting a surge in mail-in ballots because of the pandemic.

"The President has been clear, that this the attempt to discredit the postal service and make people unwilling to vote by mail but we will not be defeated," Schakowsky said.

Last week President Trump said he would block a Democratic proposal to give the postal service more funding. At the same time, he acknowledged that funding was needed to process mail-in ballots.
The president has repeatedly claimed mail-in ballots will lead to a rigged election. There has been no evidence of widespread fraud linked to voting by mail.

President Trump has also voted by mail in past elections, including 2016, and requested a vote by mail ballot to vote in Florida for the 2020 election.

The state elections board is forecasting at least one in eight votes for the November 3 general election to come in through the post office. But they add that now is the time to request your mail-in ballot.

Ballots are expected to be mailed to those requesting them starting September 24.
However, earlier this summer the post office told election officials their operating standards won't necessarily meet Illinois laws governing how much time a voter is supposed to have to request and then mail in their vote. As a result, Chicago election officials say October 13 is the latest you should request a mail-in ballot.