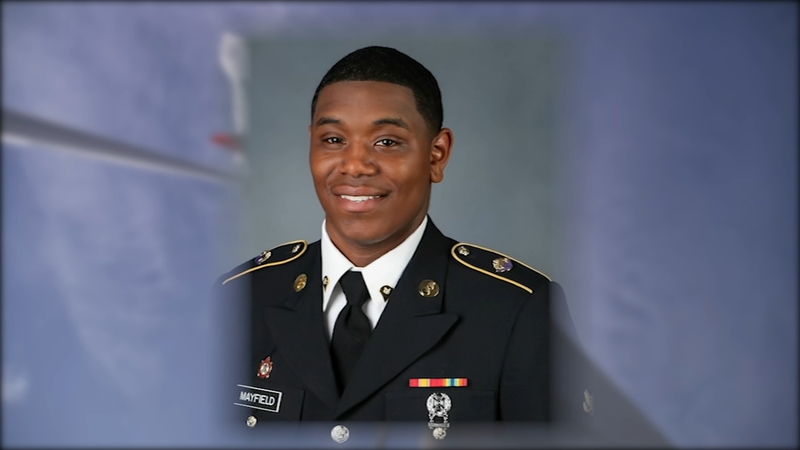 Army Specialist Henry Mayfield Jr. was killed in the attack at Manda Bay Airfield by Al-Shabab extremists. Two American contractors with the Department of Defense were also killed.

The Department of Defense confirmed Mayfield's death, and said he was in Kenya as part of Operation Octave Shield. He was previously assigned to Fort Rucker, Alabama, before he was deployed overseas.

Mayfield's family plans to head to Dover Air Force Base Monday to bring their son's body home. He is expected to arrive back in Hazel Crest Tuesday, where he will be honored as a hero.

"My son was a great man and we love him and we're going to miss him," said his father Henry Mayfield.

The knock at the door came Sunday afternoon and the Mayfield family was told their son was killed in the attack. They never thought speaking to him just days ago would be the last time.

RELATED: 3 Americans killed in Al-Shabab attack at Kenyan military base

His mother Carmoneta said she was always worried when he was deployed, but felt he was a little safer in Kenya, she never imagined what would happen.

Part of a blended family, Mayfield leaves behind many loved ones, including eight siblings.

The family of a soldier from south suburban Hazel Crest killed in Kenya gives a statement.

"At this time, we would like to say thank you for all your kind words that we have received. The loss of a child is devastating no matter how it occurs. This was a senseless act of violence that has changed our lives forever. Our son was a great big brother, cousin and above all he was an awesome person. We will miss him tremendously. He brought joy to everyone he came into contact with. We will miss that joy. At this time, we are asking for time to grieve in privacy."

"He spoke with his son, actually, before he was shipped off to Somalia, and he basically said his son told him Somalia is pretty safe, I should be OK, so those are the last words he spoke to him," Mayor Alsberry said.

His family said Mayfield had plans to pursue a career in business, studying at Northern Illinois University. He joined the Army two years ago to help pay for college. He graduated from Hillcrest High School in 2014.

"Henry came to our school from Bogan High School during his junior year," said Hillcrest Principal Dr. Renee Simms in a statement. "He graduated in 2014 and we are very proud to have been able to be a part of his life, even if it was only for a short amount of time. Henry will be missed by many of our alumni, staff, and community members. We are beyond grateful for Henry's service to our country, and we admire him for his bravery. We will look back fondly on the memories and moments we were fortunate enough to share with him at Hillcrest High School. Our deepest condolences go out to his family and friends."

His family worried when he was deployed to Kenya in October, but he always assured them that he was OK.

Neighbors have been coming by the Mayfield home all day, to offer their condolences. Even Hazel Crest officials are reaching out to help this hero's family.

His family says he was an awesome young man with a lot of potential and one that will be missed by many that knew him.

The family plans to bring their son home to Chicago Tuesday and start the process of planning his funeral.

The attack on the Manda Bay Airfield was the al-Qaida-linked group's first attack against U.S. forces in the East African country, and the military called the security situation "fluid" several hours after the assault.

The attack on the compound "involved indirect and small arms fire. After an initial penetration of the perimeter, Kenya Defense Forces and U.S. Africa Command repelled the al-Shabaab attack," said the Africom statement. "Reports indicate that six contractor-operated civilian aircraft were damaged to some degree. Manda Bay Airfield is utilized by U.S. forces whose missions include providing training to our African partners, responding to crises, and protecting U.S. interests in this strategically important area."