Obama's speech to a crowd of over 18,000 inside Chicago's McCormick Place was full of hope for America's future, but he made no mention of President-elect Donald Trump, who will take over in just 10 days.

President Obama used this chance to say thank you to his supporters and highlight his successes over his two terms including reversing recessions, healthcare reform, the Iran Nuclear Deal and wiping out Osama Bin Laden.

"By every measure, America is a better, stronger place than when we started," Obama said.

President Obama thanked First Lady Michelle Obama, his daughters Sasha and Malia, Vice President Joe Biden, and all the organizers and volunteers who worked on his campaigns over the years.

"Michelle - for the past twenty-five years, you've been not only my wife and mother of my children, but my best friend...You made the White House a place that belongs to everybody. And a new generation sets its sights higher because it has you as a role model. You've made me proud. You've made the country proud."

"To Joe Biden, the scrappy kid from Scranton who became Delaware's favorite son: you were the first choice I made as a nominee, and the best. Not just because you have been a great Vice President, but because in the bargain, I gained a brother. We love you and Jill like family, and your friendship has been one of the great joys of our life."

As the first family waved goodbye, one of the Obamas was noticeably missing. President Obama's youngest daughter, Sasha, was not in attendance. She stayed home in Washington, D.C., to study for an exam.

Many supporters started lining up early Tuesday morning to make sure they got a good spot inside the Lakeside Center at McCormick Place.

"It felt as if I was sitting across the table from him in a coffee shop," said Christopher Coleman. "It felt familiar. It felt like I'd known him all my life."

"It was like a book end to his presidency, and it just added that nice ending to it," said Christina Kuo. "It brought everything home."

Debra Larkins was first in line at 6 a.m. Tuesday. She said she was looking forward to hearing Obama's last words as president on what may be his last trip to Chicago while in office.

"This is a very memorable moment in our history. We have a remarkable leader. Barack Obama is a wonderful president and I really, really admire him. I really wanted to get a chance to see him," Larkins said.

Unless something happens between Tuesday night and Jan. 20, when President Obama boards Air Force One after delivering his speech, it will be his last trip as president outside Washington, D.C.

After the inauguration, Obama will board the plane and fly to an undisclosed location. But the jet technically won't be Air Force One any longer.

The president has said he plans to take Michelle Obama on vacation to a warm location after they leave the White House.

Some Chicagoans gathered at the Harold Washington Cultural Center to watch President Obama give his final speech.

"It just inspires me," said Keith Carter. "It makes everything feel possible, and as soon as you feel something is possible, it makes it possible."

TICKETS DONATED TO WEST SIDE TEENAGERS

Some people who scored tickets to Obama's farewell speech donated them to teenagers from Chicago's West Side so they could attend the historic event.

President Obama is a role model for the twelve teenagers attending the speech. Jahmal Cole, founder of My Block My Hood My City, put the word out on social media for people to donate to his group. The non-profit aims to inspire teens from economically challenged neighborhoods.

"What better role model for these kids to see than a community activist from Chicago that rose to be the first African-American president of the United States of America," Cole said. "It's going to be a transformative experience."

"He never forgets anybody. That's the most important thing. He remembers his hometown. We as Chicagoans feel blessed for that," said Francis Carroll who ate breakfast at Valois Tuesday morning.

"Obviously every president has their successes and their failures. But I think overall, it's been a great run and an unprecedented one. Definitely one for the history books," said Shana Mireku, another Valois customer.

The restaurant closed early in anticipation of a visit from Obama, who stopped by prior to heading to McCormick Place around 6:21 p.m.

Valois is just one of the many Hyde Park businesses the Obamas used to frequent during their Chicago years. The Hyde Park Hair Salon is another. The president is so attached to his longtime barber, he's with him now.

"People come in just to be a part of it. It's not necessarily about Obama. It's the atmosphere of the shop itself and why came into the shop is because of the comfort of the shop," said Antonio Coye.

President Obama started coming to the Hyde Park Hair Salon back in the 90's and developed such a bond with his barber Zariff, he regularly flies to Washington to cut the president's hair. It's a sentiment echoed by many of the barbershop's current clients.

"I come here because of my barber. Didn't know the chair was there or any of that when i first started coming but it's drawn a lot of people here," said barbershop patron Dwayne Fitzpatrick.

Hyde Park is without a doubt an Obama stronghold to this day. It doesn't take much to find someone who knows them from their time here.

A nondescript strip mall is where the Obama's had their first date, at a now-defunct Baskin Robbins. A plaque marks the spot. Amanda Englert used to work with Michelle Obama.

"I know them from the community when their kids were at Lab and it's sweet to have something like this, their first date," she said.

The Obama's Kenwood home is little over a half a mile from where the barricades are now being set up to receive him. For eight years, the stretch of Greenwood has been off limits to all except residents. Driving past it Tuesday was Elio Troncoso, the president's former masseur, who made frequent visits to the then candidate's home in 2008.

"I used to go to the house, twice a month probably. Michelle maybe once a month. I helped him a lot during his election. He was pretty stressed out," said Troncoso.

Like many in the neighborhood, Troncoso is feeling nostalgic.

"It's going to be sad to see them go. I hope they get to do a lot more things for the country now afterwards," he said.

With Obama's farewell speech just a few hours away, the White House asked Americans to share their most memorable moments of his presidency. 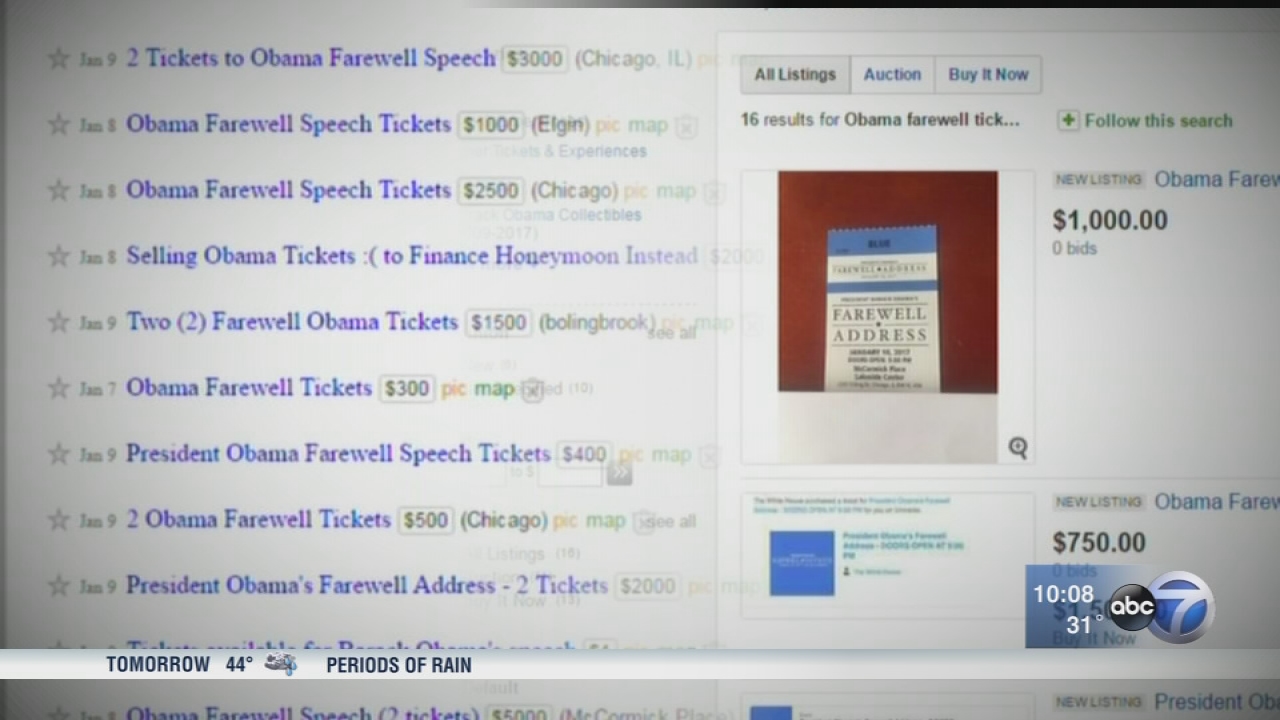 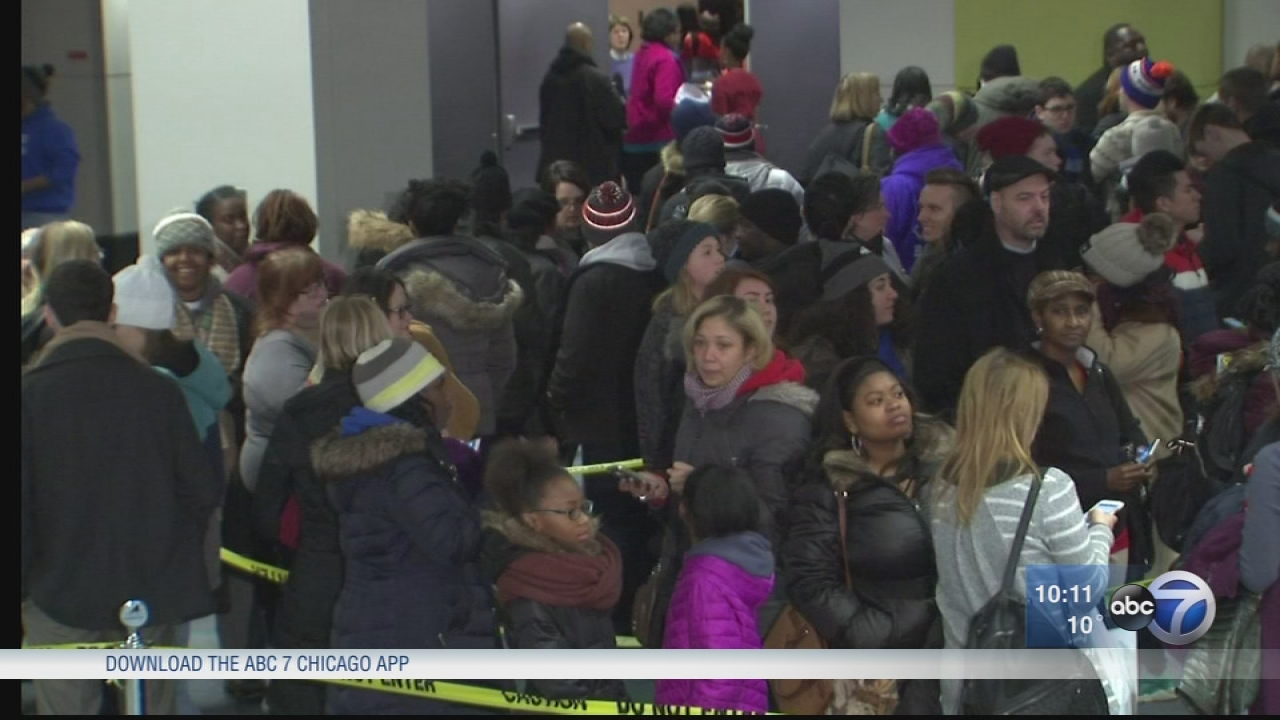 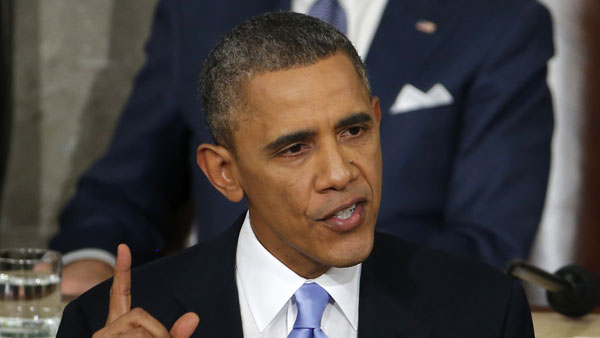 Is Obama planning a farewell event in Chicago?