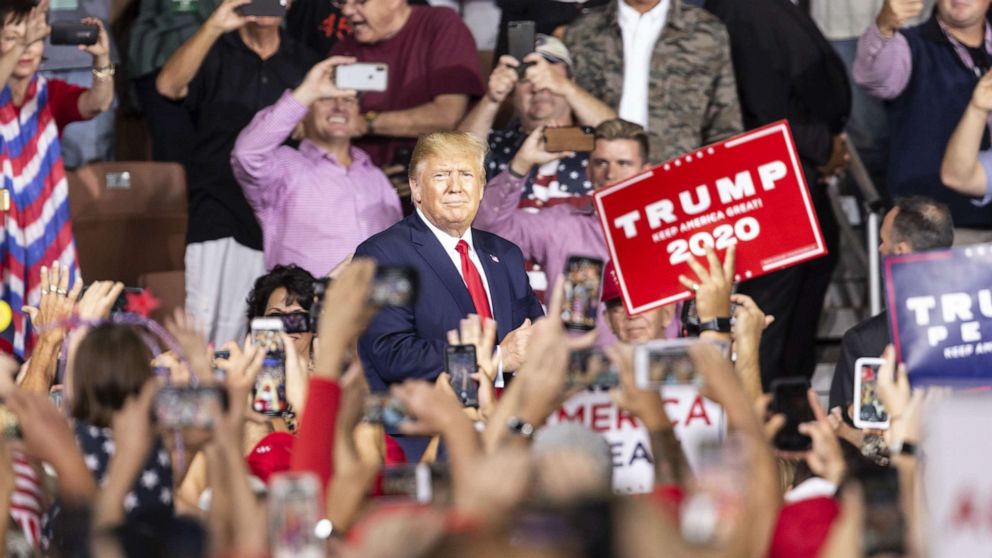 As President Donald Trump rallies in Minnesota he brought not only his campaign roadshow to a state he nearly won in 2016, but a pressure cooker of conflicts ranging from battling House Democrats amid an escalating impeachment inquiry to now sparring with Republican allies over his decision to withdraw U.S. forces from northern Syria.

After recent visits to other states the president lost in 2016 like New Hampshire and New Mexico, Thursday's rally in Minneapolis is the latest example of the Trump campaign looking to expand their electoral map heading into 2020.

"[The president] would not come to a state and rally this early on unless he knew he could influence it and win it," Trump campaign communications director Tim Murtaugh told ABC News ahead of Thursday's rally.

But perhaps more pressing, as Trump took the stage Thursday night it was the first time he would pitch himself on the campaign trail amid an intensifying impeachment investigation push that continues to grow more popular with Americans and just days after the White House announced it would not cooperate with the Democrats' inquiry.

And despite polling showing public support for the impeachment probe is on the rise, the Trump campaign maintains the inquiry has only energized their supporters, arguing it provides an opportunity to convince voters who feel House Speaker Nancy Pelosi and House Intelligence Chairman Adam Schiff's approaches in the matter haven't been fair and prove Democrats have been out to get the president since his election win.

Trump kicked off his campaign rally in Minneapolis Thursday night by quickly offering a fiery and vehement defense of his presidency amid Democrats intensifying impeachment inquiry.

"These corrupt politicians and the radical left got rich bleeding America dry and they knew my election would finally end their pillaging and looting of our country," a defiant president railed Thursday night. "That is why from day one, the wretched Washington swamp has been trying to nullify the results of a truly great and democratic election."

President Trump's long, blistering, and at times vile speech saved some of his most intense attacks for Joe Biden and his son, promising the impeachment push would produce "backlash at the ballot box."

The president delivered this raw message to Hunter Biden about his father.

He went on to slam House Speaker Nancy Pelosi claiming she's "either really stupid" or "she's really lost it --or maybe there is a certain dishonesty in there."

The president also offered a string of vicious attacks on Rep. Ilhan Omar in her home district-pushing a number of conspiracy theories and arguing "everything about Omar is a fraud." A few supporters shouted "send her back," however the full crowd did not recite the chant.

The president did not mention Rudy Giuliani or indictments.

The president also echoed familiar arguments he's made recently against the inquiry, arguing that Democrats can't win in 2020 so they are now "pursuing the same impeachment witch hunt."

Trump promised the impeachment push would deliver him an even bigger victory in next years election and will "produce a backlash at the ballot box, the likes of which they have never, ever seen before in the history of our country."

The campaign is already hard at work testing that thesis in the blue state of Minnesota, pouring hundreds of thousands of dollars in ads and building out staff on the ground where Trump lost by just 1.5 votes in 2016.

"Last time in 2016 we had one paid staffer in Minnesota and he was eventually moved to Colorado," Murtaugh said. "And now, at the moment we have 20 full time paid staffers and by Election Day we will have nearly 100," he added, while also mentioning the campaign plans to spend tens of millions in the state ahead of 2020.

On top of bringing the president and Vice President Mike Pence to the rally at the Target Center, the campaign also put on a "Women for Trump" event on Wednesday in St. Paul hosted by the second lady Karen Pence, and Lara Trump, the president's daughter-in-law. The campaign and the Republican National Committee has also already dumped over $300,000 on the ads in the state fighting back against impeachment leading up to Thursday's rally, according to Federal Communications Commission filings.

Minnesota represents a unique testing ground for a campaign fighting hard to prove it can not only flip the state next year but turn impeachment into an asset for the president.

Yet there were plenty of protesters on hand outside the venue as well. Hundreds of protesters set fire to Make America Great Again hats and other Trump memorabilia before police in tactical gear broke the crowd up, according to reports.

And the campaign has already proved, at least early on, it can at least turn impeachment into cash - spending millions fundraising off Democrats' newly launched inquiry in late September, and bringing in $8.5 million in the first 48 hours - 50,000 of which came from new donors, according to the campaign.

Thursday's rally also provided a slew of opportunities for the president to not only go on offense against his favorite 2020 Democratic targets like former Vice President Joe Biden who's also engulfed in Trump's Ukraine scandal, but also Minnesota congresswoman Ilhan Omar and Mayor Jacob Frey-who Trump's already clashed with over a security fee dispute leading up to the campaign rally.

Omar, who months earlier was on the receiving end of racist attacks from not only the president, who told the congresswoman and three of her peers to "go back" to their home countries, but also from Trump supporters at a rally in July whose chants of "send her back" were aimed at the Somali refugee who became a US citizen.

"Trump will see his rally in my district today as an opportunity to attack me," Omar preemptively tweeted hours before Thursday's rally. "But no smear will ever stop me from working toward what I'm in Congress to do," the congresswoman added, listing off a number of goals she hopes to achieve including "impeach Trump.
Report a correction or typo
Related topics:
abc newsnational
Copyright © 2021 ABC News Internet Ventures.
TOP STORIES
FOP pres. posts video after ordered not to talk about vaccine mandate
Man, 55, shot in Wicker Park amid robbery attempt near 6 corners
COVID tops cause of death for police for past 2 years
Pritzkers made $5.1M last year, tax records show
National Association for Down Syndrome to hold annual fashion show
Open House Chicago offers exploration of 100+ architecture
Roz Varon's Weekender Report
Show More
2 CPD officers, woman injured in hit-and-run in Austin
Breast cancer awareness 5K set to start at Soldier Field
Gunman shoots 3 Texas deputies from behind, killing one: police
Booster shots outpacing new COVID-19 vaccinations in Indiana
Chicago Sky take 2-1 lead over Phoenix Mercury in WNBA Finals
More TOP STORIES News