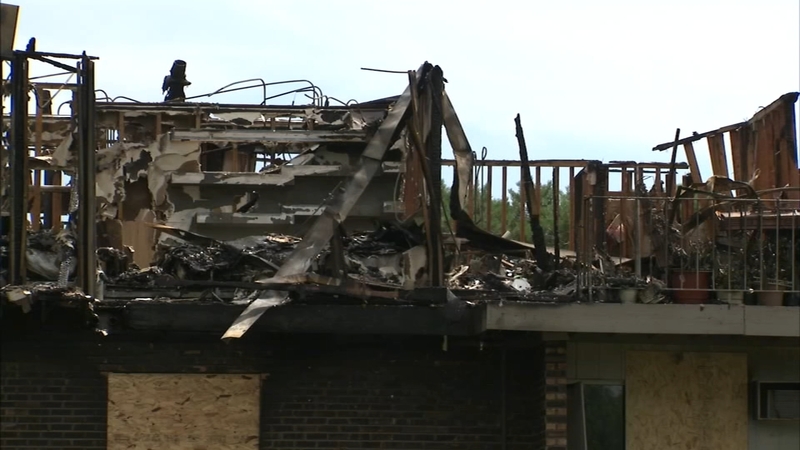 The fire burned in the 800-block of McIntosh Court. Each time firefighters appeared to get the blaze under control, flames flared up again.

"It seems like it keeps getting bigger and bigger. They're trying to control it, it gets better, and then again there's more fire coming out," said Alfred Rubio, resident.

Prospect Heights Fire Chief Drew Smith said the fire began at about 1:30 p.m. Smith said more than 150 firefighters from 50 departments in the area were working on the fire. It continued to burn into the night.

A resident said her children were playing outside Wednesday afternoon and alerted her to the fire. Video footage shows it started on the balcony of a corner condominium. Firefighters were able to quickly put out the initial flames, but the fire had already entered the roof and its hollow design allowed flames to spread unpredictably.

The fire quickly spread to two more 24-unit buildings next door. Firefighters were able to stop the fire from spreading to the fourth building nearby.

Smith said two of the three buildings will be total losses and the third building suffered some fire damage and significant smoke and water damage.

None of the buildings had sprinklers due to their age, Smith said. Sprinklers had not been added because the trigger to add sprinklers to old building is remodeling or modification of at least 50 percent of the structures. He said he expects that the owners will be required to add sprinklers when they rebuild in the wake of the fire.

Police said windy conditions and the lightweight wood truss construction of the roof made it a very difficult firefight.

Three people were taken to local hospitals to be treated for smoke inhalation. A firefighter was seen being taken away on a stretcher, but appeared responsive.

Pets are feared dead if they were in units alone while their owners were at work, Mayor Nicholas Helmer said.

The cause of the fire has not yet been determined.

"Everything, everything. Whatever I have on now plus this," said resident Monica Alvarez, holding up her keys, "that's all I have. That's all I have. And my children, thank god for that. I got my babies, but other than that, the clothes on our backs is all we have."

"It's hard to see all those memories of pictures and all those emotional items that go along with their loss," he said. "Then we are going to have to start all over again."

Nelson Flores now has nothing but the work clothes he is wearing.

"What I thank that everyone is alright, like family. Nobody got hurt," he said.

The Red Cross of Chicago said 10 responders are at the scene to help provide food, shelter and emotional support to the residents who have been displaced. A shelter is open for displaced residents at Lakewood Chapel on East Palatine Road.

"They need a friend. They need someone to stand with them. And if we can't be a friend in a time like this, what good are we?" Elleson said.

"It fits all the criteria we need so we are going to take him up on his offer," said Red Cross Captain Ron Leffler.

Volunteers brought pizza and water as residents could only watch from a distance as fire gutted their buildings.