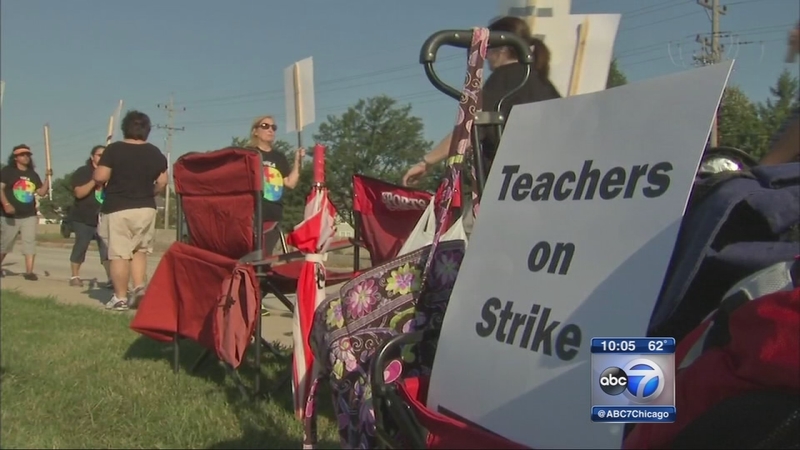 PROSPECT HEIGHTS, Ill. (WLS) -- A suburban school board and teachers were back at the bargaining table Sunday night looking to end a strike that has kept kids in Prospect Heights out of classrooms for nearly a week.

From the start Sunday evening the board suggested a cooling off period so classes could resume Monday while negotiations continued, but the union rejected that proposal and while a new financial proposal was presented and discussed Sunday night, there is late word Sunday night from the board that the strike will continue into Monday.

Teachers and parents rallied just before the union and the board of education sat down once again to attempt to reach an agreement on a new three-year deal. The union voted to strike around midnight Wednesday, leaving all 1,500 students in District 23 out of school for three days last week.

"We want to get an agreement done," said Bob Miller, President of Prospect Heights Education Association. "We want to work with the work in order to get the kids of District 23 back in the classrooms, get the teachers back into classrooms where they belong."

Despite those assertions, however, the union rejected a proposal set forth by the board Sunday to have a two-week cooling off period during which teachers and staff would return to work starting Monday, and continuing negotiations under the guidance of a federal mediator.

"We feel like we are getting closer together every time we meet with them, but if it keeps dragging on, it's just really unfortunate for the kids to be out of the classroom for so long," said school board president Mari-Lynn Peters.

For parents, the lack of progress is frustrating, understanding on one hand the teachers desire to be paid more money while also being mindful of the budget.

This is only the second time the board has sat down to negotiate with the union since the strike was announced. Salary remains the main sticking point. The union insists their 150 members are some of the lowest paid in the area, leading to a retention rate that is also lower. The contention is disputed by the board, but many parents are siding with the teachers.

"If you want a quality education for your children, you need quality educators," said parent Mary Fleisas. "What does that mean? You have to pay them well. And you have to respect them."

Negotiations continued late Sunday night, but classes have been called off in Prospect Heights for Monday. That doesn't mean an agreement won't be reached, just that if it does, it could come quite late.