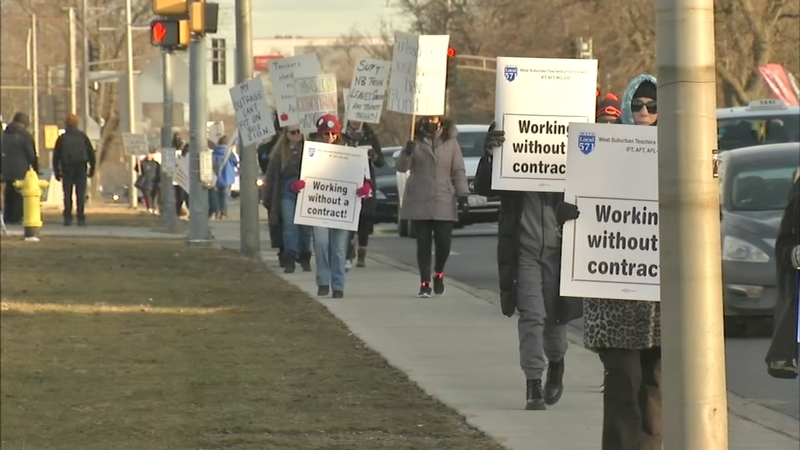 Teachers are on strike at all three campuses of Proviso District 209 including Proviso East in Maywood, Proviso West in Hillside and Proviso Mathematics and Science Academy in Forest Park, which means classes are cancelled.

"We feel a lot of times that we're undervalued so for us to go out on strike just kind of sends a message that we are important," said Proviso East teacher Donald Robinson.

"We are willing to be on strike as long as it takes for them to listen to us," said Rachel Esposito, Local 571 West Suburban Teachers Union president. "Right now they have locked out our students. They have locked out other employees. They have nothing to do with the strike and so now what's going to happen with them? they're making a statement too."

The district said it has increased its salary proposal offer from 7% over three years to 9%, but they said the teachers are demanding a more than 13% increase over the three-year contract.

The district released a statement saying, "The District remains firm in our position that salary increases at the level being demanded by the union are neither sustainable, nor in the best fiscal interest of our parents and other local resident taxpayers."

The union said it's fighting to attract and keep teachers with competitive salaries.

"There has been financial documents that have been presented to us that show they are in a surplus, so that shouldn't be an issue," Esposito said.

Proviso East history teacher Lindsey Townsend said she spends her own money to help her students with supplies and has thoughts of leaving the district.

"It makes it tough because I don't wanna leave, but I can't afford to live if we either don't get more money or I have to go somewhere else and that's not what I want," Townsend said. "I love these kids."