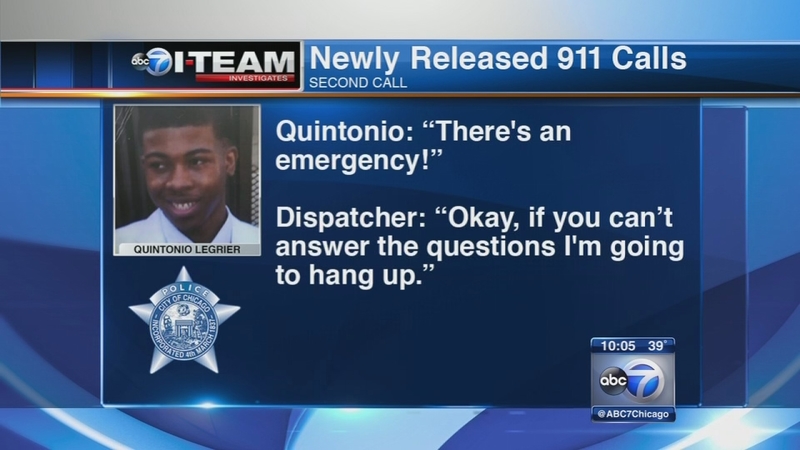 Quintonio LeGrier called 911 3 times before he was shot

CHICAGO (WLS) -- Audio for the 911 calls made the night that Quintonio LeGrier, 19, and Bettie Jones, 55, were fatally shot by a Chicago police officer were released Monday afternoon.

The shooting happened the day after Christmas in December 2015 in the West Garfield Park neighborhood.

Initially, it was believed that there were only two 911 calls - one from LeGrier, who was home on winter break, and a second from his father. However, now the city's Independent Police Review Authority has determined that there were four calls -- three of them from Quintonio LeGrier.

"It was very clear that he wanted the police department there to help him. Not once, not twice, but three times. And the system completely failed," said Larry Rogers, Jr., an attorney for Bettie Jones' family.

After hearing the 911 calls, a lawyer for LeGrier's father, Antonio LeGrier, said the dispatcher's behavior was disgusting, accusing her of being belittling, rude and disrespectful.

The Northern Illinois University student was visiting his father when he called 911 early Sunday morning saying there was some kind of emergency, noting that his son "freaked out" and was wielding a bat. When police arrived at the home after the third call from the teenager, it was Quintonio LeGrier himself who ended up shot by police. In their official statement, police said Quintonio LeGrier had been combative.

Quintonio LeGrier was shot a few minutes after his last 911 call, along with Jones, a downstairs neighbor. Police have called Jones' shooting an accident.

A city spokesperson says the 911 operator who hung-up on Quintonio LeGrier is facing discipline, but she's still on the job taking calls while the process plays out.

The calls were released by the Independent Police Review Authority, which is investigating the shooting. That's a dramatic change for an agency that previously released almost no information while its investigations dragged on for years.

Full statement from the Office of Emergency Management and Communications (OEMC):

OEMC takes our role in public safety extremely seriously. We discovered these two calls - and the issues surrounding them, during our own internal review and immediately started an internal disciplinary process - turned them over to the Independent Police Review Authority, and we will continue to partner with them as they investigate this case.

The Chicago Office of Emergency Management and Communications receives 5 million 911 calls a year, of which 2.5 million are dispatched. Call takers are required to ask specific questions to determine the nature of the event, determine if such a request warrants and emergency response and dispatch proper resources. Call takers follow specific protocols and may only terminate a call as a last resort.

Disciplinary proceedings are underway for the call-taker who handled the call at 4:18 a.m. for not following proper protocol. Per the CBA, the call-taker will remain in service until the discipline process is complete.

Below is full text of Quintonio and Antonio LeGrier's 911 calls:

Q: "Can you please send the police?"

Q: "Someone is ruining my life."

Q: "Are you going to send the police?" *He mumbles what sounds like an obscenity after this*

Dis: "Are you going to answer my questions?"

Dis: "I'm talking to you? If you can't answer the questions, how do you expect me to assist you?

Dis: "No you didn't. You told me that person was at the house."

Dis" Where are you going to be?

Dis: "No, it don't work like that. What's your emergency?"

Dis: "You can talk to an officer over the phone. I can connect you with one if you would like."

Dis: "Is the person there with you now?"

Dis: "Are you in an apartment or a house?"

Dis: "And your name?

Q: "Are you going to send an officer?"

Dis: 'Yeah when you answer the question."

Q: "There's an emergency, can you send an officer?"

Dis: "Yes, as soon as you answer the questions. What's your last name?"

Dis: "If you can't answer the question I am going to hang up."

Dis: "Has he been drinking?"