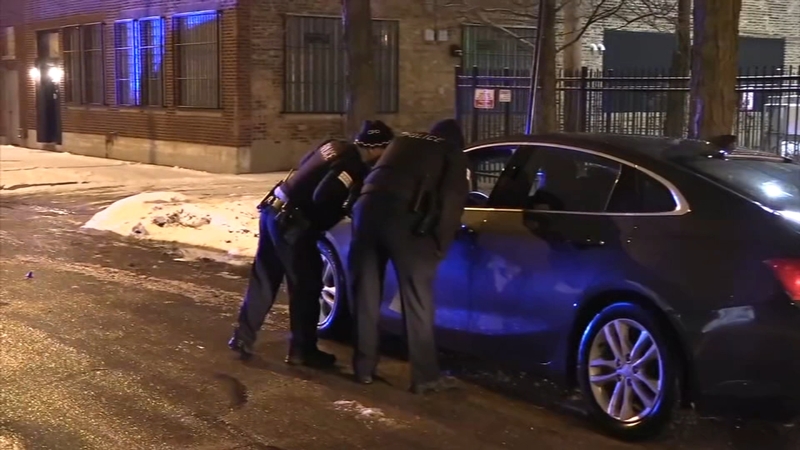 CHICAGO (WLS) -- Police were called to R. Kelly's studio in the West Loop after the keys to a rental car belonging to an Atlanta TV news crew were stolen Sunday night.

Just before midnight, Chicago police responded to a theft in the 200-block of North Justine Avenue. A news crew from CBS' Atlanta affiliate left their rental car running to cover activity outside the musician's studio in the West Loop and told police it took less than a minute for someone to steal the key fob.

Police said they were told someone got out of a black SUV, went into the news crew's rented 2018 Chevy Malibu and took the keys from the center console. The suspect then got into the SUV and took off southbound on Justine Avenue, according to police.

The investigative crew from the CBS affiliate in Atlanta said they got out to confront who they believed to be R. Kelly getting whisked out of the studio just before midnight, and that's when they claim someone stole their key fob.

Breaking: @cbs46 investigative team confronted who we believe to be R. Kelly as he was whisked out of his Chicago recording studio late Sunday night. At the same time, the driver of an SUV leaving the studio jumped in our vehicle and stole our keys, knowing we were media.

So someone gets their key fob (which should’ve been in their pocket) stolen and they blame #rkelly. Next thing you know they’re going to blame him for the coming government shut down.

R. Kelly's attorney believes the news crew is making up the story to make his client look bad. The musician and Chicago native's life has been under the microscope as he fights allegations of sexual abuse by multiple women.

His recording studio warehouse is also making headlines regarding whether it was being used illegally as a living space. A Chicago housing judge barred anyone from using it overnight, setting a curfew for all people to be out by 9 p.m., which means R. Kelly could be in violation.

"Unless they were invited inside, I don't know how they would know that," Greenberg. "If anyone goes there, you can't see inside and you can't tell who if anyone is there. I can tell you that he has every intention of complying with the court's orders that are in place."