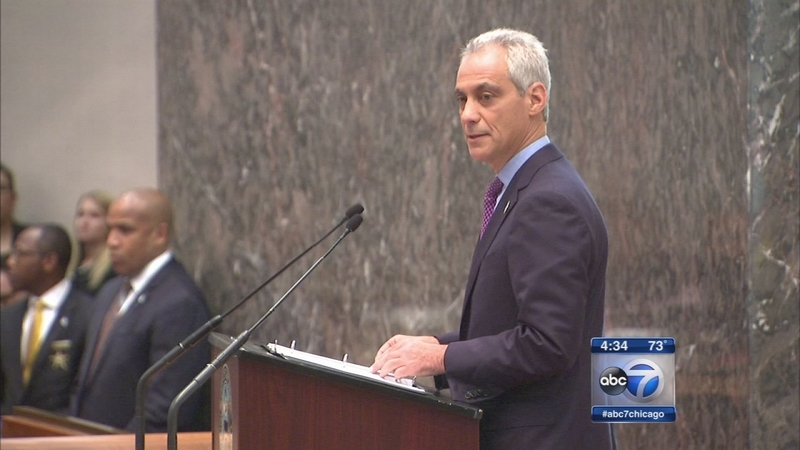 CHICAGO (WLS) -- Mayor Rahm Emanuel outlined his 2017 budget proposal on Tuesday, saying that the city's financial situation is better than it has been in years.

"Five years ago, Chicago was on the financial brink. Today Chicago is back on solid ground," said Emanuel, who touted a drop in the city's budget deficit over the last five years.

Emanuel told alderman during his budget address that pension debt was "on the path to solvency" thanks to city property, water and cellphone taxpayers now on the hook for hundreds of millions more each year.

This is Emanuel's first budget without an unresolved pension debt crisis, which meant that not much in new taxes was needed since he'd already done the "heavy lifting" during his first five years in office.

The mayor's proposal calls for increased spending by $282 million. In all, the mayor's plan would spend $9.8 billion compared to $9.3 billion this year.

And yes, includes a raise in taxes.

"While homeowners are being asked to step up, we are making sure that our central business and businesses across the city are also carrying their full weight as well," Emanuel said.

His 2017 plan makes big investments in the Chicago Police Department, including a new training facility.

The mayor plans to hire 970 officers over the next two years. Five hundred new officers will be hired next year, along with 200 new detectives. His budget also funds 92 field training officers to teach new training procedures.

The spending plan includes a multi-million dollar plan to improve the city's 311 technology.

The mayor's plan does include a seven-cents-per-bag tax on disposable bags provided at grocery stores. The tax would raise about $13 million and, according to city officials, would encourage shoppers to bring reusable containers to stores.

More than five years after his first inauguration, Emanuel still blamed his predecessor for the city's fiscal plight. Without using his name, he called Richard M. Daley "dishonest."

"And we allowed that dishonesty to turn into a real financial burden," Emanuel said.

Property owners will see higher property taxes for public schools and parks, plus there is the sales tax hike imposed by Cook County. And one expert said the Chicago tax storm might not be over.