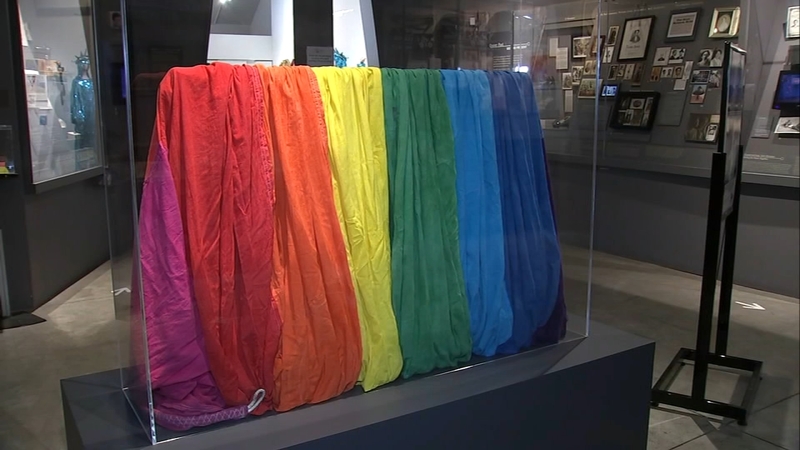 SAN FRANCISCO -- The first rainbow flag used to celebrate LGBTQ+ Pride has been found and is back in San Francisco.

It's on display at the GLBT Historical Society Museum just in time for Pride Month. For years, it was thought to have been lost. But now we know where it was all along.

Showing its bright colors, it is now protected behind an acrylic panel. The first-ever rainbow flag is a manifestation of freedom.
It was created by Gilbert Baker in 1978 when activist Harvey Milk asked him to come up with a symbol for the LGBTQ+ community.

In a 2017 exclusive interview with KGO-TV reporter Lyanne Melendez, Baker talked about the moment he knew it had to be a flag.

"Flags are about power. Flags say something. You put a rainbow flag on your windshield, and you're saying something," he said.

As the gay community was rising, then activist Harvey Milk saw the need to create something that would symbolize that community. Milk approached a young artist and sewer from Kansas to fulfill his message of hope.

The museum has an old picture of that flag that went up during the Pride Parade at UN Plaza.

After Pride, the flag was stored in a leaky building, home of the former San Francisco Gay Community Center.

Damaged by mildew, Baker cut the damaged part out, keeping only a fragmented piece of the original flag. It was then put back in a box. In 2017, he died in New York.

No one knew what became of that flag -- until Charlie Beal of the Gilbert Baker Foundation went looking for a big rainbow flag for an event he was organizing.

At that time, all of Baker's belongings were in his sister's garage.

RELATED: Pride Month 2021: What to know about its history, events, parades

Disappointed, he put the box with the flag in his closet.
But someone who had worked with Baker on the flag knew what was in the box.

"In this phone call, he asked me whatever happened to that fragment of the original flag and I said, 'What fragment?' and he started to describe this thing to me and the hairs on the back of my neck goes up and I'm like, 'He's talking about this thing in my closet,'" Beal said.

After examining the grommets, rope and stitching, they were able to verify that it was the original flag.

The first flag created by Baker had more colors than the ones we are used to seeing, eight instead of six. In that March 1, 2017 interview, Baker described his work and what the flag meant to him. He died 30 days later.

"Hand-dyed, big mess, cotton, oh my God you don't even want to know, stitch, stitch, stitch on the little Singer. Pink is for sex, red is for life, orange for healing, yellow for sun, green, nature, turquoise for magic, blue for serenity, and purple for the spirit. I like to think of those elements as in every person," Baker said in that 2017 interview.

Up to the very end, Baker never stopped working on the flag and its message of acceptance.