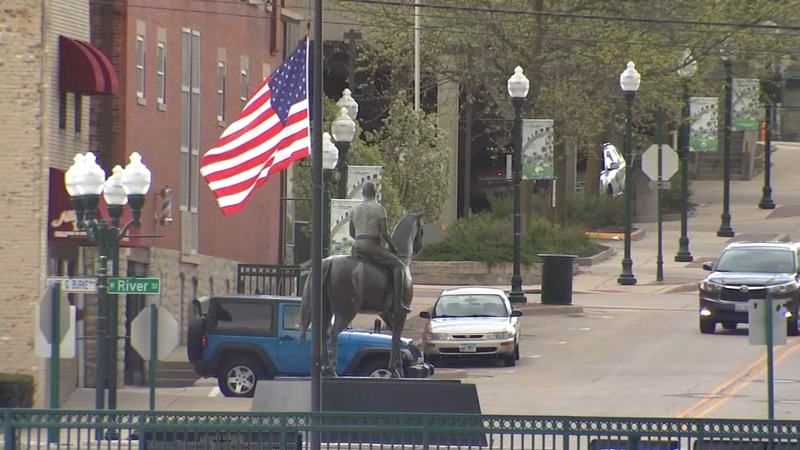 CHICAGO (WLS) -- Since the coronavirus crisis began, all 102 counties in Illinois - from tiny Hardin County in southern Illinois with less than 5,000 residents to Cook County with more than 5 million - have been painted with the same brush by the Pritzker administration

In many small communities across Illinois, business owners and local leaders are wrestling with why they should fall under the same rules as Chicago and other urban centers in the state when they have comparatively few COVID-19 cases and deaths.

Pushback against Governor JB Pritzker's slow phase-in, regional plan to reopen Illinois began even before the plan was announced, especially in the rural areas well beyond Chicagoland.

That includes picturesque Lee County, where the Rock River rushes through the Northwestern section of Illinois, located 100 miles west of Chicago with a population of about 34,000.

The county seat is in Dixon, and since lockdown day in March the river has been the only thing running as normal.

Venier's Jewelry was opened 75 years ago by his grandfather and uncle, right after World War II. Venier also serves on the Dixon city council.

Dixon has now been shut down by less than 50 COVID-19 cases in the entire county. No deaths have been recorded.

"We're in a rural community. We are zero deaths. We are striving to get back to some sense of new normal," he said.

"It's a different picture over here in rural America than in Chicago," said Dr. Partip Nag, chief medical officer at KSB Hospital in Dixon.

"If you look at Illinois and you just look at the IDPH map of the number of cases that Illinois has, and you can actually clearly see what and where the densities are," Nag said. "The picture is painted just to look at. And to say, you know what, yeah, what's happening in Chicago and what's happening in this metropolitan area does not paint the whole picture for the rest of the state."

Dixon is best known tourist attraction is Ronald Reagan's boyhood home. The Reagan family moved in there 100 years ago, in 1920. Regan himself was 9 years old at the time, the family paid $15 rent, and it was just after the world's worst health pandemic: the Spanish flu pandemic.

That was long before social distancing; there was a corner drug store, but no drugs to treat the virus. More than 23,000 Illinois residents died in that pandemic.

A century later, a different virus, and even with better healthcare there are similar questions. There is also a train of thought saying smaller towns and rural areas should have a special carve out in reopening plans.

"That seems to be, that's the direction we're moving in, in that we're not seeing the numbers that they are in the cities," Venier said.

And some business owners are growing impatient. The city council had to get involved this week when a local hair stylist was thinking about going rogue.

100 miles west of Chicago, the Dixon city council had to break up plans by a local salon owner to break state coronavirus rules.

It was item one at Dixon's virtual council meeting on Monday night.

"We received complaints about a specific business that planned on defying the executive order and opening tomorrow," said Dixon City Manager Danny Langloss.

Officials in the north central Illinois city aren't identifying the business owner, who would be in violation of the governor's continuing ban on nonessential commerce.

"We know it's tough on the nonessential businesses. That's the governor's term; we hate it," said Langloss. "All of our small businesses are essential."

As of Wednesday evening, city leaders said they have convinced the salon owner to stay shut down with a warning, according to the manager: "We'll contact the appropriate state licensures, we'll work with the health department and the states attorney's office. We can't have that. We can't have that. Let's work together and we're going to get through this."

Demmer prepared a joint plan by Lee and Ogle counties for an immediate, several stage reopening that they are presenting to Gov. Pritzker.

"The option of returning to normalcy doesn't exist," Pritzker said during one of his daily briefings this week.

But yesterday, before receiving Demmer's plan, the governor announced Restore Illinois, a plan that puts both counties in the same region as urban and more deeply-infected Rockford. In the Restore Illinois plan, relief is not possible for anyone in the state until at least next month.

"It should be informed by the data that you find in your community," Demmer said. "What's the incidence level, what's the likelihood of transmission happening in the community, and what common sense steps can you take to limit your own risk without having an across-the-board closure."

Other leaders of Republican regions away from Chicago said they've also heard from their constituents after the governor's announcement.

"I can tell you that the governor's plan that we first saw yesterday, it doesn't play in Peoria" said State Rep. Ryan Spain (R-Peoria).

"These arbitrary designations really create problems for communities that are trying to move forward at a truly regional level, based on hospital utilization patterns, and it gives further incentive to communities to just go it alone and not follow compliance for what would be a more thoughtful regional plan," Spain said at a news conference Wednesday with Illinois Republican Party leadership.

But even before the governor's announcement, some in Lee County urged restraint.

"We are, have not, reached the peak in our area," said Cathy Ferguson-Allen, administrator of the Lee County Health Department. "We have neighboring counties with much larger number and they're our neighbors, so that could impact us very easily if people don't heed the stay at home order."

"I wouldn't be in favor of doing anything at this very moment," she added. "I would want to see a decrease in numbers before we did anything differently."

"At this point, when we've been through it a month and a half and we haven't been seeing, you know, the rise like some other cities have been, I feel like it feels a little unfair," said Amy Nicklaus, owner of Rustic Roots.

"We went into this saying if we lose one business that's one too many," Venier said.

Venier believes up to 30 percent of their small businesses could fail if the stay-at-home order continues this way.

"We just think it's time to start moving forward into the next phase of recovery," he said.