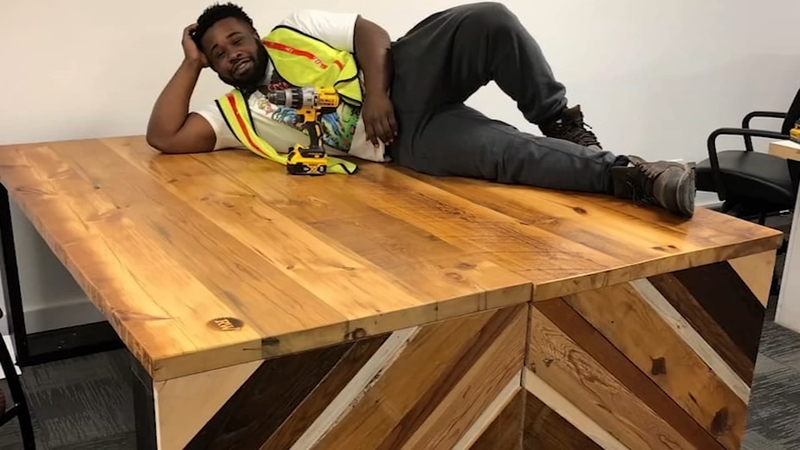 CHICAGO (WLS) -- In the shadow of the L tracks on Lake Street in Chicago's East Garfield Park neighborhood, there's something profound and inspiring going on in an unassuming warehouse.

Revolution Workshop, a non-profit jobs training program, teaches Chicagoans, many of whom are former offenders, drug users and homeless residents, to create custom handmade furniture and other construction skills.

"Before Revolution Workshop, to be honest with you, I probably was one of the guys you ride past and just see standing, hanging out," said Jawaun Funches.

The 10-week program, which began in October 2018, not only teaches woodworking, but also skills that can land trainees work in construction and other building trades.

"As you build it and see it being transformed from excavation, from just a concrete foundation and then the beams and stuff going up, to the framing, to the drywall, placing of windows, it's like a baby coming alive," Funches said.

Miller said Revolution Workshop came to be while he was having a home built.

"Our contractor had hired a young man with an ankle bracelet. And this young man ended up making furniture," he recalled. "I'll never forget the day he came to deliver the furniture to my house, and the look of pride and just exuberance."

Rodriguez, a Chicago native born and raised in the city, is familiar with the kind of hardships many of the non-profit's trainees have faced in their lives.

"Single mother. My father was an addict. And people looked out for me," he said. "But for a lot of our folks, their backgrounds make my background look like I grew up in the Hamptons."

Rodriguez said about 75 percent of the program's trainees have been incarcerated in some form before, and many of them have also struggled with substance abuse.

"Our whole goal is to train people in the basics of construction, safety, tool usage, basic blueprints," Rodriguez said. "We also then operate a simulated work environment, so they come in here. They clock in, clock out, just like they were on the job. They're late three or more times, we ask them to leave."

The trainees make furniture and semi-custom work, and then deliver them to the customer.

"In some ways we're hoping that we can have both groups learn from each other," Rodriguez said.

"One of the things we also want to do here is blend affluence and poverty," said Miller.

Funches said the program has been transformative for him and his family. His kids see different things in his eyes now.

"Determination. They used to see the struggle, but now it's determination, pride and progress," he said.

The construction and building industries are badly in need of an infusion of young, skilled labor, and so Revolution Workshop has gotten quite a bit of attention from various employers.

"Right now what we have in construction is a major boom," Rodriguez said. "But then here's the other we have, is our contractors are saying I can't find young blood. And the average age of the construction worker is about 50 years old."

So it's a win-win. Revolution Workshop supplies the industry with the young labor it needs, and in turn its trainees are given a new chance at life.

"It's very therapeutic for me," said Alex Werner, trainee. "Honestly, it makes my heart, like, really happy. I've loved it since I started, and I can't imagine going anywhere else."

Rodriguez and Miller said the greatest part of their mission is hearing from trainees that graduated the program that they've landed a job, and they said about 90 percent of their trainees have done so.

"I mean, that's why I do this," Rodriguez said.

"It's important to think about the Chicago that we want to envision for the future," Miller said. "People simply need an opportunity."