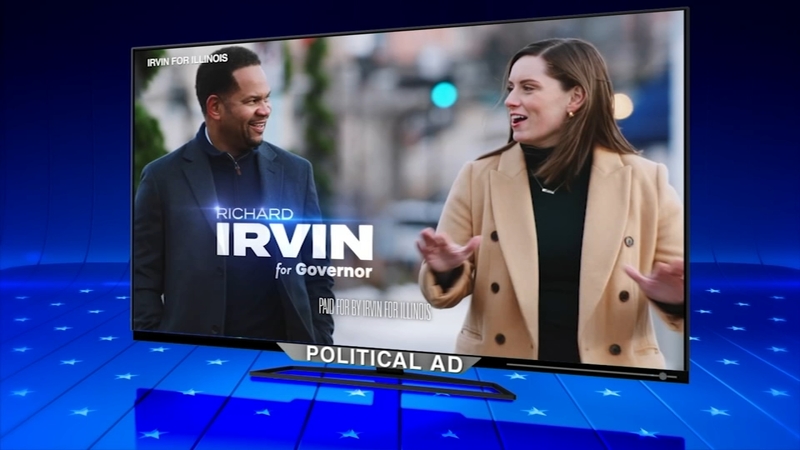 Aurora Mayor Richard Irvin fired his first salvo in the governor's race with a television commercial eight days after joining the race.

"A riotous mob, the police outnumbered but backed up by their mayor, Richard Irvin called in the guard," the advertisement began.

"We will not put up with this BS and this foolishness," Irvin said in a news clip from a press conference at the time.

"Pritzker's leftist agenda is literally killing us, turning parts of Illinois into a war zone," Sullivan said in the ad, while highlighting the more than 800 murders in Chicago in 2021.

"There's a lot of polling out there that shows crime is the number one issue in the state, both from among republicans and democrats, so they're getting on a bread and butter issue that really matters to voters," said Laura Washington, an ABC7 political analyst.

Irvin also reported his first campaign donations, which total more than $1.2 million, including big bucks from some well-known Republican donors. Notably, he received $250,000 from billionaire real estate investor Sam Zell and $250,000 from Craig Duchossois, who is of Arlington Park fame.

"What stands out is the money is not coming so far, from Ken Griffin," Washington said.

Griffin, Illinois's richest billionaire has pledged he is "all in" to support a Republican candidate to defeat Pritzker.

Pritzker's campaign declined to comment on Irvin's ad, but the Democratic Party of Illinois said that Irvin's claim of calling out the National Guard was misleading, since Pritzker was the one who authorized the request.

Irvin's refusal to take questions from reporters for eight days since launching his campaign, while relying on a video and a TV ad for messaging, is something political observers call unusual, and something Pritzker has repeatedly criticized.

"I think all of those candidate need should be answering questions for the press," Pritzker said January 20th.