'Rise' is based on the real-life story of the Antetokounmpo brothers, the first trio of brothers to become NBA champions
OTRC 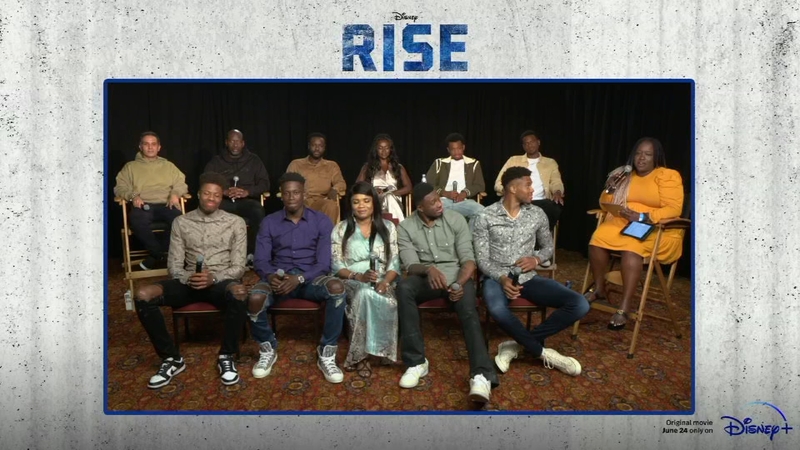 NEW YORK -- "Rise" is based on the real-life story of the Antetokounmpo family, including brothers Giannis, Thanasis and Kostas, the first trio of brothers to become NBA champions in league history - Giannis and Thanasis while playing for the Milwaukee Bucks and Kostas as a Los Angeles Laker. Giannis is famously known as the "Greek Freak." Their brother Alex is also a professional basketball player.

The film follows the family after Charles Antetokounmpo and his wife Vera (Veronica) emigrate from Nigeria to Greece, showing their efforts to provide for their family under the threat of deportation and secure Greek citizenship through a flawed immigration system that "blocked them at every turn," according to the film's synopsis.

"Everybody talks about us, about me, Thanasis, Kostas, and Alex, and Francis, but they always leave out our parents you know, my dad and my mom," Giannis said. "So, you know, we knew that one day we were going to tell them, like, who the real heroes of this story are, of this journey are."

Meantime, Giannis and Thanasis begin playing basketball on a local youth team and discover their talent and passion for the sport. The rest, of course, is history as Giannis, Thanasis and Kostas are eventually drafted into the NBA.
"Rise" stars real-life brothers Uche and Ral Agada as young Giannis and Thanasis.

"I was just layin' in bed one day and I was goin' on Instagram. And I see a screenshot of a tweet that Giannis put out saying that Disney's making a movie about his life and his family's life and they're looking for someone to play him and his brothers," Uche said. "So, I just clicked on a link and I just send a video, just talking about myself. And then, I sent in a video. A few months later, I got a call back. And for me, I was never an actor prior to this, so this was very weird for me. So, when it said callback with a director of a movie, in my mind, I'm like, yo, that's crazy. But I did that callback and did another callback. And eventually they told me I got the part, which is absolutely incredible."


That wasn't the end, there was more good news.

"And then, couple weeks later, they asked me if I had any siblings and I said I had an older brother," Uche said. That led to the casting of his brother Ral.
The cast also includes Dayo Okeniyi, Yetide Badaki, Manish Dayal and Taylor Nichols.

"Everybody that played our family, they did an unbelievable job," Giannis said. "We feel like they're our family now and they're a part of us."

"Rise" was directed by Akin Omotoso, written by Amel, and produced by Bernie Goldmann. Giannis Antetokounmpo is credited as an executive producer alongside Douglas S. Jones.

The film also includes original music co-written and performed by the eldest Antetokounmpo son, Francis, who is known under the stage name Ofili.