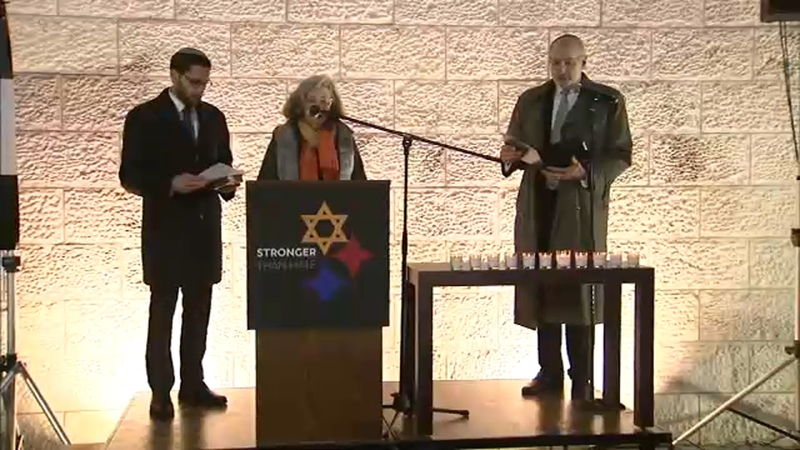 SKOKIE, Ill. (WLS) -- Relatives of victims, Jewish communities across the country and many Americans are still reeling from the deadly shooting at Pittsburgh's Tree of Life Synagogue over the weekend. Victims are being remembered by relatives and strangers alike.

Hundreds gathered in north suburban Skokie Monday evening and while their hearts were heavy, their spirits were high.

"I'm a Jewish person from Pittsburgh," said Melody Coven. "There's not much to say, but just saying, 'I don't know the words to say but I'm here' has meant the world."

The vigil at Temple Beth Israel was a show of unity against bigotry, held in the parking lot as a statement that the vigil is public, open, and inclusive. The names of all 11 Tree of Life victims were read aloud, and speakers of all faiths spoke fiercely of peace.

"More than ever I believe it's time for us to come together as one community," said Rev. Michael Nabors, Second Baptist Church of Evanston.

Vigils were also held on the campuses of Northwestern University in Evanston and the University of Chicago in Hyde Park.

To get a sense of how tight knit the Squirrel Hill neighborhood in Pittsburgh is, just talk to Marci Holzer.

To get a sense of how tight knit the Squirrel Hill neighborhood in Pittsburgh is, just talk to Marci Holzer. She and her husband both grew up there and were childhood sweethearts.

They now live on the North Shore, but are still connected to their hometown, which made news of the deadly shooting at the Tree of Life synagogue even more devastating. Holzer's relative, 97-year-old Rose Mallinger, was one of the victims.

"We are losing civility. We don't know what civil means anymore," Holzer said.

She it's painful to see the anti-Semitism that fueled the shooting thrive.

"I think we're living in an age where people want to just go back. But not go back to good values like safe homes where you don't have to lock your doors, they want to go back to white people only," she said.

"I think it's always been there and i think in the current climate, people feel emboldened to be able to speak it out loud and act on it," said Rabbi Donni Aaron.

Aaron visited Tree of Life several times, and was there just last week.

A family in suburban Lombard is heartbroken after losing two brothers in the Pittsburgh synagogue shooting on Saturday.

Aaron also got to know Cecil Rosenthal who was killed along with his brother David. Their family in suburban Lombard is devastated and mourning.

"When we were there last week, I hadn't seen him in two years. And he came up to me and said how have you been? Where have you been, rabbi? He knew exactly who I was," she said.


Earlier, people of different faiths gathered at DuSable Museum where they condemned the massacre and called for respect and tolerance.

"Nine people were slain in an African Methodist Episcopal church in South Caroline, so I stand here with you recognizing the trauma, the pain," said Rev. James Moody of Quinn AME Church. "But I also stand here as someone who is dissatisfied, and I'm praying that everyone is dissatisfied."