'We want the USA to help to stop this war.'
WLS
By Evelyn Holmes 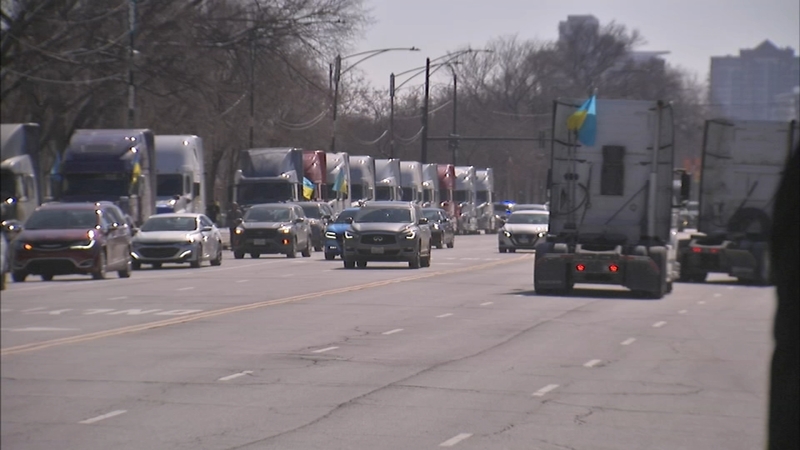 CHICAGO (WLS) -- Ukrainians living in Chicago united on Saturday to show solidarity with their native country with a truck and a car caravan more than 100 vehicles long.

"We really want to help them break the neck of this evil whose name is Putin," said truck driver Oleg Danlyak.

"It's the kind of support for our country and we want the USA to help to stop this war," said truck driver Dymtro Kimash.

Organized in less than 24 hours using social media, the caravan of semi-trucks, most draped in the blue and yellow Ukrainian flags, started in suburban East Dundee and ended at Chicago' Buckingham Fountain downtown.

The demonstration was among several in the U.S. as Americans rally behind the people of Ukraine.

"I still hope that every time I call them I will still get a message that they are still alive," she said. "They are still okay and my country is still safe."

Many of the protesters say they want the U.S. and NATO to close airspace over Ukraine to stop Russian bombing raids and expel Russia from SWIFT, the international financial trading system.

"This is why we are here to support because we know what a war is. Russia attacked Moldova in 1992," a demonstrator named Nadia said.

"His (Vladimir Putin's) plan is to actually renew a Russian empire. That means it's not only a problem for Ukraine and Belarus," said Belarus native Yana Karslyan.

Some Ukrainian Americans fear the worst if Russia isn't stopped.