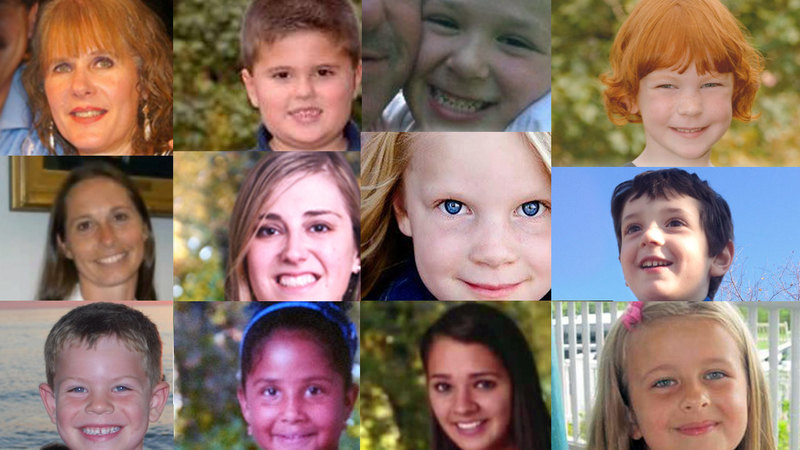 Remembering the 26 people killed in the Sandy Hook Elementary School massacre on Dec. 14, 2012.

NEWTOWN, Connecticut -- On December 14, 2012, a shooter opened fire at Sandy Hook Elementary school, killing 20 first-graders and six educators in one of the deadliest mass shootings in United States history.

Virtual vigils and services were being held Monday in Newtown, Connecticut, to mark the anniversary and remember victims of other gun violence incidents.
EMBED More News Videos

On Dec.14, 2012, a shooter opened fire at the school, killing 20 first-graders and six educators.

Flags in the state are flying at half-staff.

"The memories of the 20 young children and six educators whose lives were tragically taken on that horrible morning eight years ago will forever remain in our hearts," Governor Ned Lamont said. "We can continue to honor them by performing acts of kindness, love, and humanity that brighten the lives of others and bring comfort to our community."

Out of the senseless tragedy, many have sought ways to find meaning in advocacy. Many relatives of the victims have dedicated themselves to charity, activism and other efforts to channel their grief and, in many cases, to help prevent gun violence.

"Our hearts are heavy today as we mark eight years since 20 beautiful children - Charlotte, Daniel, Olivia, Josephine, Ana, Dylan, Madeleine, Catherine, Chase, Jesse, James, Grace, Emilie, Jack, Noah, Caroline, Jessica, Benjamin, Avielle, and Allison - and six courageous adults - Dawn, Mary, Vicki, Lauren, Rachel, and Anne Marie - were taken from us all too soon," Lt. Governor Susan Bysiewicz said. "In the hours, days, and months that followed one of the most tragic days in our history, we saw an unprecedented outpouring of kindness and hope from millions of people across the state and country that showed only light and love can drive out darkness and hate. We must continue to protect the core values of humankind - love and unity - and ensure these principles serve as our guidepost for every facet of our lives. Newtown, my heart is with you today and always."

President-elect Joe Biden released a statement marking the anniversary. Biden, who was vice president at the time, called the event "the saddest day we had in the White House" and reflected on his own conversations and relationships with the families that lost loved ones in the tragedy.

"To the grandparents, parents, siblings, children, spouses, and fellow broken and healing hearts of Sandy Hook, I know," he said. "No matter how long it's been, every time you talk about it, you relive it as though you just heard the news. Eight years later, I know the pain never fully heals."

Biden also called out the thousands of lives every year that are lost to gun violence in the United States and praised the Sandy Hook families for speaking out in the wake of the tragedy for common sense gun reforms.

"In this collective pain, you've helped usher in a collective and growing purpose," he said. "You've helped us forge a consensus that gun violence is a national health crisis and we need to address its total cost to fully heal families, communities, and our nation."

"To the grandparents, parents, siblings, children, spouses, and fellow broken and healing hearts of Sandy Hook, I know. No matter how long it's been, every time you talk about it, you relive it as though you just heard the news. Eight years later, I know the pain never fully heals.

"I think about how that day eight years ago was the saddest day we had in the White House. Twenty first-graders. Their six educators. And I think about the time we have spent with each other grieving since then. I remain in awe of you. I have heard from and watched as so many of you turned pain into purpose, working to change our laws and our culture around gun violence and how we protect and nurture our children.

"I know it can feel like an impossible task. Since this December day eight years ago, your nightmare has been felt by thousands of other families in our country who have lost a piece of their soul in other schools, a shopping mall, a movie theatre, a club, a house of worship, in their neighborhoods, and in their homes. Some of these tragedies make national headlines, so many more do not. Every year, more than 30,000 people die from gun violence across America-a statistic we would associate with war in a far-off place. Countless more are left with a lifetime of injuries and trauma.

"But in this collective pain, you've helped usher in a collective and growing purpose. You've helped us forge a consensus that gun violence is a national health crisis and we need to address its total cost to fully heal families, communities, and our nation.

"Eight years later, there have been plenty of thoughts and prayers, but we know that is not enough. Together with you and millions of our fellow Americans of every background all across our nation, we will fight to end this scourge on our society and enact common sense reforms that are supported by a majority of Americans and that will save countless lives.

"Jill and I send our love to you and we pray for the twenty-six angels in heaven and in our hearts."

Just two weeks ago, the governing board in Newtown blocked proposed bans on carrying firearms around town from further consideration.

The decision came after the board heard from gun control activists who said they were intimidated at protests by armed Second Amendment supporters. After listening to testimony from both sides of the issue Wednesday night by phone because of the pandemic, the Newtown Legislative Council deadlocked in 6-6 votes on whether to refer three proposed gun restriction ordinances to the council's Ordinance Committee, effectively killing the requests.

Members of the Newtown Action Alliance, formed after the school shooting to prevent gun violence, had proposed the measures, in response to feeling threatened by gun rights advocates carrying firearms during protests outside the National Shooting Sports Foundation, a gun industry group that happens to be based in Newtown.
"It's disheartening and disappointing to live in a community where the leaders are choosing not to take our recommendations seriously, particularly after what we've been through in this community," said Po Murray, a local resident and chair of the alliance.

A survivor and relatives of nine victims of the 2012 massacre filed the wrongful death lawsuit against Remington in 2015, saying the company should have never sold such a dangerous weapon to the public.

Remington made the Bushmaster AR-15-style rifle used in the attack, and a trial is scheduled for September 2021.

The school where the shooting happened in 2012 was knocked down, and a new building was constructed at the same site.