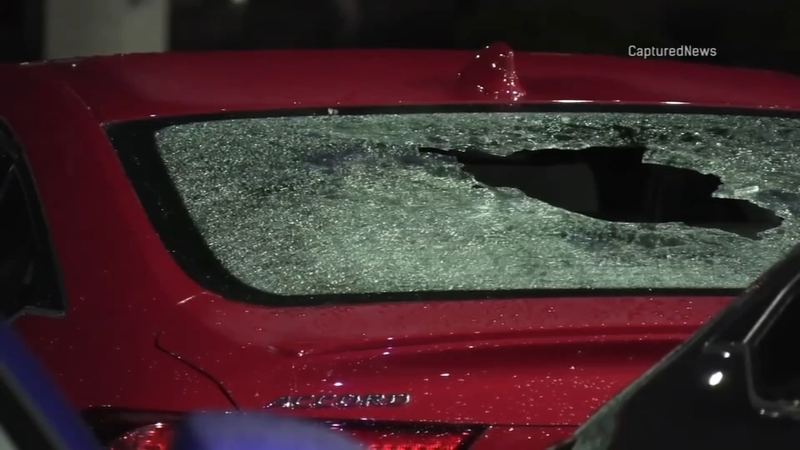 SCHAUMBURG, Ill. (WLS) -- A man is in custody after more than 100 cars were damaged at three dealerships in Schaumburg Thursday.

Eighty-three cars were damaged at the Honda dealership and another 19 at a Ford dealership across the street.

The overnight spree of violence has created a headache for the dealerships. The damaged vehicles all had their rear windshield smashed in and many of the cars already belonged to customers.

The Honda general manager said it all happened just after 1:30 a.m. Police arrested the man in the Honda parking lot after already learning about the damage he allegedly made at two other dealerships on the same street. It adds to a recent trend of crime for these businesses.

"Unfortunately, we're dealing with a lot of additional crime. This is the first type of vandalism like this. We've had cars attempted to be stolen. We've had to harden our defenses quite significantly," Ashford said.

It's a similar mess for the Ford dealership near East Golf Road. The man is accused of damaging about 20 cars there, with smashed windshields in each one, a part that isn't cheap to fix.

"It's substantial. It's the most expensive window in the car. It's got the fog unit, so it's pricey," said Alek Kaliak, general manager of the Ford dealership.

This all comes at a time when these dealerships are already struggling with inventory shortages and delays in servicing cars.

"Some of our customers are waiting two, three months for cars right now," Ashford said. "One of the cars, unfortunately, the customer flew in last night to pick up and so we're in the process of getting that windshield replaced," Ashford said.

It's still not clear what the motive was behind all of the vandalism, but it will take weeks of repairs to clean it all up.