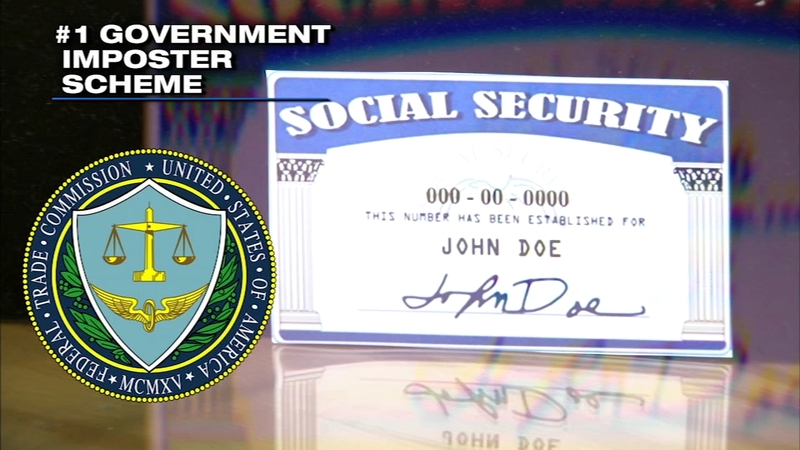 CHICAGO (WLS) -- Criminals tell you your social security number is frozen and your benefits will be gone unless you pay up. Americans lost almost $45 million last year to this scam.

A local woman told the I-Team the emotional story of how she was convinced to hand over her life savings of $80,000. She lost her money to what's being called one of the top scams.

"It hurts very bad, sometimes I cry when I am by myself," Zenaida told the I-Team. She asked that we not show her full face or use her full name, but she wanted to tell us how she fell for the social security scam.

"I came from a poor family when I came here in United States," she explained.
"Your social security number has been suspended," was the recording left on Zenaida's phone. When she called the number back, Zenaida said: "She hypnotized me. I just follow what she's telling me."

The Federal Trade Commission said the scam is No. 1 when it comes to all government imposter schemes. The Social Security Office of the Inspector General says numbers from 2020 show 718,000 complaints and almost $45 million dollars in losses.

ABC7 I-Team Consumer Reporter Jason Knowles was able to record one of those scam calls.

Victims are instructed to wire money to "re-activate" or "clear" a Social Security Number from alleged "criminal activity." Knowles was told that his number was being "misused and that I needed to send gift cards or bitcoin."

The man claiming to be from Social Security somehow had access to all of Knowles' information, including full name, address, and even his family's information.

Knowles: "What do I need to do? You said I have 77 account attempts in my name in Texas?"
Fake Social Security: "Yes, 77 bank accounts under your name in Texas and he's using your families information also, Allison, James, Jason, Jeffrey. So sir, listen to me very carefully you just tell me one thing, do you want to fight this case inside of the court house with a criminal attorney or can I forward your call to the ADR department or connect you to the ADR department?"

He didn't say what the ADR department was. The call continues after he connected Knowles.

Knowles: "Hello?"
Woman's voice: "Hi, is this (inaudible) With whom that I'm speaking with?"
Knowles: "Yes, I'm recording for my records because I'm terrified."
Woman hangs up.

That call was similar to the one Zenaida received on her answering machine.
Zenaida shared her Cook County Sheriff's report, her bank withdrawals and the trail of money she wired, likely overseas. The I-Team called the scam contact number back too and it was disconnected. So the I-Team brought her case to the Social Security Administration Office of the Inspector General in Chicago.

"Once the money travels, whether it's through wire or cash, there is little we can do on our side or in anybody's case to retrieve those funds," said Boockmeier.

However, investigators said they strongly encourage people to report all calls.

"They are slowly putting the puzzle together as part of the larger investigation," Boockmeier said. "There is hope. We are working on it every day. It's our number one priority right now."

To prevent yourself from becoming a victim, hang up on any suspicious call that says it's coming from Social Security.

And Bookmeier said that if there is a legitimate issue with your Social Security number, Social Security doesn't call you but, "Victims of identity theft could get a letter."

If you get a letter from Social Security ,it would come in the mail, not by e mail. Social Security investigators say they're also informing people about these e mails with fake, social security letters attached. Those fake letters have the same scam story that fooled Zenaida.
If you have received a fake call that says it's from Social Security you should report it even if you didn't lose money. Remember Social Security will never ask you to wire money or send gift card codes.

Resources to protect you from the Social Security scam