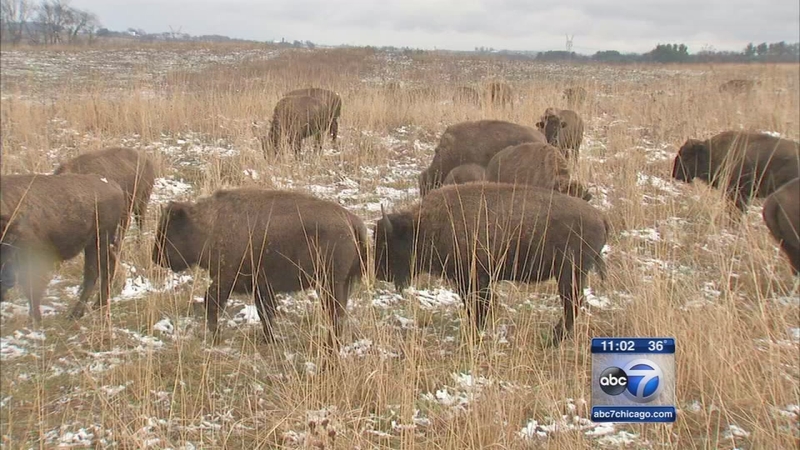 FRANKLIN GROVE, Ill. (WLS) -- Some familiar creatures are roaming the prairie of Illinois once again, as a growing herd of wild bison have found a home in the tall grass just east of Dixon.

Illinois has never lost its nickname of the "Prairie State," though nearly all of its prairie was lost long ago. Except for spots like the Nachusa Grasslands about 100 miles west of Chicago, and amidst the prairie grasses there are Bison. These are direct descendants of the big creatures nearly brought to extinction in the 1800s. They roam free here again.

"We've been describing this as the first wild bison heard east of the Mississippi," said Bill Kleiman, Nachusa Grasslands Project.

Thirty of bison arrived in the fall of last year as part of a dream the environmental non-profit Nature Conservancy had nearly 30 years ago, when it started buying over 4,000 acres here. The goal is to restore a big chunk of prairie to its true natural state, and a big piece of that is the Bison. They eat grass which makes way for more native plants which brings more insects which brings more birds - 180 species at last count.

"The web of life is like that," Kleiman said. "Things are all connected together, and bison are bringing more diversity to the landscape. That's our goal."

The initial arrivals here find this new home quite to their liking.

A total of 16 calves have been born this year, the first baby bison birthed east of the Mississippi since the 1830s. They grow fast. A couple of them tipped the scales early on at over 400 pounds.

They are numbered, but not named, that would be too much like a zoo. There is purposely very little human interference.

"It's kind of a living museum," said Nachusa Grasslands Restoration ecologist Cody Considine. "People can walk out here, see the landscape, see what Illinois was."

It's also a museum of what it is, and it's a mecca for researchers. There are fences, so it's not total bison freedom, but they've got 500 acres, and soon 1,000 more when a new section opens. Though a farm road separates old and new, the animals need not cross, for they have a brand new bison underpass. There may need to be enticements for the first exploration.

Even without treats, bison are curious and it's quite clear that this herd, now at 75 and likely to double in number, is quite content at what was, and is again, home.

The Nachusa Grasslands is located on South Lowden Road in Franklin Grove, about 10 miles northeast of Dixon.

It's not always easy to the see the bison through the tall grass, but binoculars do help. The nature conservancy hopes to begin work on a new visitor center this summer.