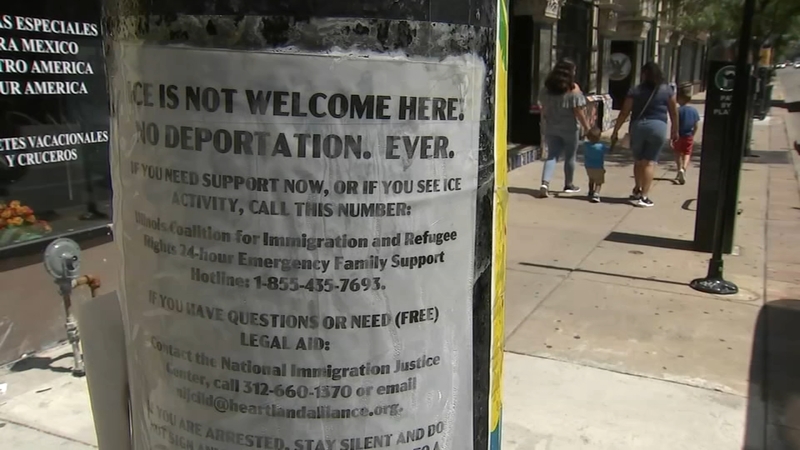 CHICAGO (WLS) -- Reports of federal immigration agents in Chicago's Pilsen neighborhood stoked fear among community members who were already on edge a day after nearly 700 people were arrested in workplace raids across Mississippi.

Despite the apparent sighting, there were no raids or arrests.

Update: My team and I went to the area where these reports originated and it appears there is no longer ICE presence. It’s important to note that there were not any reported detainments.

Will always keep the community informed if there are any further updates.
1/2

Lightfoot said no one was detained and that the agents seemed to be out to lunch.

"I have to question why, knowing the environment that we've been suffering under, particularly in a neighborhood like Pilsen, that they think it's appropriate to be wearing their ICE uniforms," Lightfoot said.

REMINDER: If ICE shows up at your door, you have rights. Memorize them.

25th Ward Alderman Byron Sigcho-Lopez said that so far, there's no evidence from Pilsen restaurants to back up the claims. Either way, he said that it shows how uneasy the community feels.

"As a city, we don't collaborate with ICE," Sigcho-Lopez said. "Just having agents just walking around or whatever the activity was, certainly given the climate, creates a lot of fear."

The fear is also bad for business.

"All the immigrants, when they are afraid about ICE, they stop spending money and we see that right away," Gonzalez said.

Irakere Picon, of the Illinois Business Immigration Coalition, said workplace raids have increased by "400%" in the past 3 years.

"It's really important we as a country, and also as a business community, stand up to make sure we find a solution so that we are not disrupting the economy," Picon said.

Picon said businesses must use the opportunity to push immigration reform.

Meanwhile, President Donald Trump defended the Mississippi raids on Friday. He said the raids served as a good deterrent for immigrants planning to come to the U.S. illegally.

Some of those arrested at chicken processing plants across Mississippi have since been released. But initially, children were separated from their parents, including 11-year-old Magdalena Gomez Gregorio.

"My dad didn't do nothing, he is not a criminal," Magdalena said about her father being arrested by ICE agents.

Up to seven poultry plants owned by several different companies were targeted. Park Ridge-based Koch Foods was one of them.

ABC7 Chicago reached out to Koch Foods. The company did not have a comment.

A group of protesters against Trump's immigration policies partially shut down Lake Shore Drive for a brief period of time during rush hour Thursday afternoon.

A group of anti-Trump protesters partially shut down Lake Shore Drive for a brief period of time during rush hour Thursday afternoon.