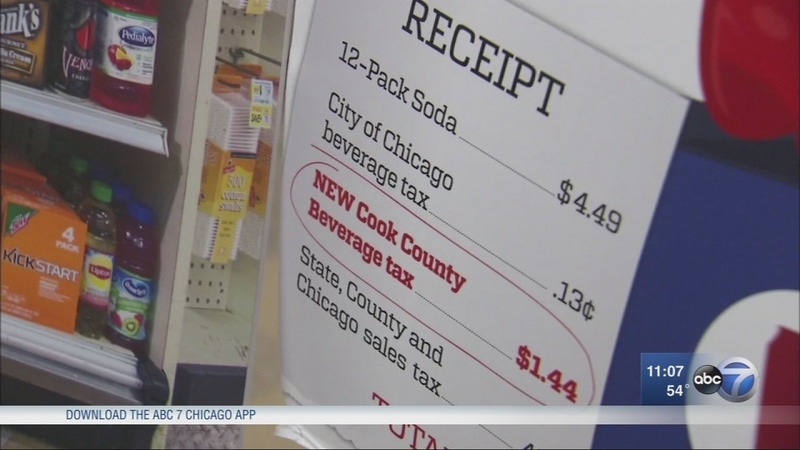 "Today the Cook County Board of Commissioners chose to place a regressive beverage tax on working families. This will result in fewer jobs, lower incomes and higher grocery bills," said Claudia Rodriguez, spokesperson for the Cook County Coalition Against Beverage Taxes. "Consumers and small businesses will now have to pay the price and bear the burden of Cook County's budget deficit."

The board's finance committee debated the special tax Thursday morning and came to a tie vote, then sent the measure to the board. There were more than 100 passionate speakers on the list to voice their opinions.
The controversial plan means a two-liter bottle of pop will cost 68 cents more than it does now. A six-pack of soda will cost an extra 72 cents.

"I don't like it. I don't drink pop a ton anymore, personally. But everything is so taxed around here and I think people are tired of it," said Amber Hough, a Chicagoan.

Cook County Board President Toni Preckwinkle said the proposed tax will help fill in a budget gap. She's counting on the $75 million the tax would bring in annually to avoid cuts in public health and public safety.

"It also puts us on a stable financial footing for the next three fiscal years during which we will not have to approve any additional tax increases and allow us to double our investment in community-based anti-violence initiatives," Preckwinkle sai.d

On Thursday, the board also announced a property and sales tax freeze through 2020.

Preckwinkle also said the beverage tax will have positive health benefits. It will discourage people from buying sweetened drinks and help fight obesity.
"With the case of diabetes, I think it's a good thing, health-wise," said Ty Johnson, a Chicagoan.

The controversial proposal had commissioners split. Commissioner Bridget Gainer said she was voting "no."

"It is a big hit, especially to restaurants, small businesses, grocery stores - the people that employ people in Cook County," Gainer said.
Martin Sandoval manages three food markets in Cook County and said he would have to lay people off if customers go out of the county to shop.

"It hurts me when I have to let somebody go, because that's my family," Sandoval said.