Man who wrote 'SOS' in snow saved after 23 days in Alaskan wilderness: VIDEO 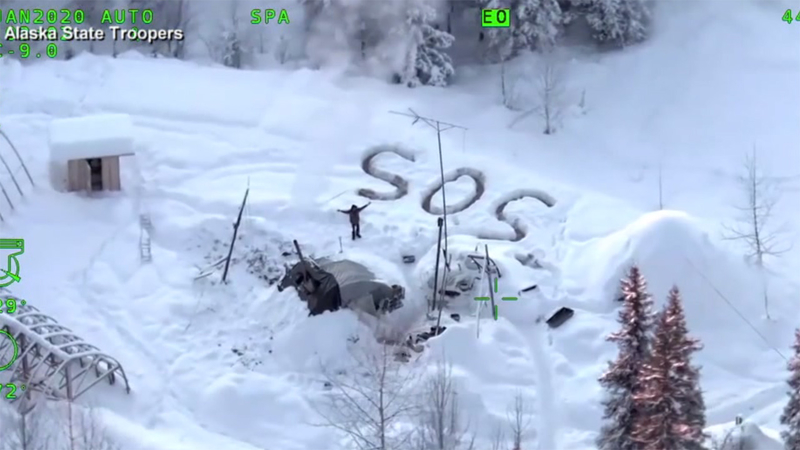 ANCHORAGE, Alaska -- A man whose remote Alaskan cabin burned down was rescued after spending 23 days in sub-zero temperatures and scrawling "SOS" into the snow.

Alaska State Troopers said 30-year-old Tyson Steele was picked up Friday in good health from an area 20 miles outside of the nearest town, Skwentna, with a population of 35.

Temperatures in Skwentna, which is 70 miles northwest of Anchorage, reached a high of 6 degrees Sunday, according to AccuWeather.

Troopers responded to a welfare check request on Steele after his family said they hadn't heard from him in weeks. Video from the rescue shows the stranded 30-year-old waving his arms at the trooper helicopter as it circles the "SOS" signal stamped in the snow.

Once Steele was transported to safety -- and requested "a long dreamed-of 'McDonald's Combo Meal No. 2'" -- he told troopers his cabin burned down in mid-December, killing his beloved six-year-old Chocolate lab Phil.

Steele said he survived by salvaging greasy coveralls from his shed for warmth and using scavenged tarps and scrap lumber to build a tent-like domed shelter around the woodstove that once heated his home.

He also managed to find a few "plastic-smoked" cans of beans and peanut butter for sustenance.

He said he now plans to return to Salt Lake City to live with his family.

"They've got a dog, and that would be some therapy," he said.