2021 WNBA Finals: Five things we learned in Game 1 that will determine the WNBA champion 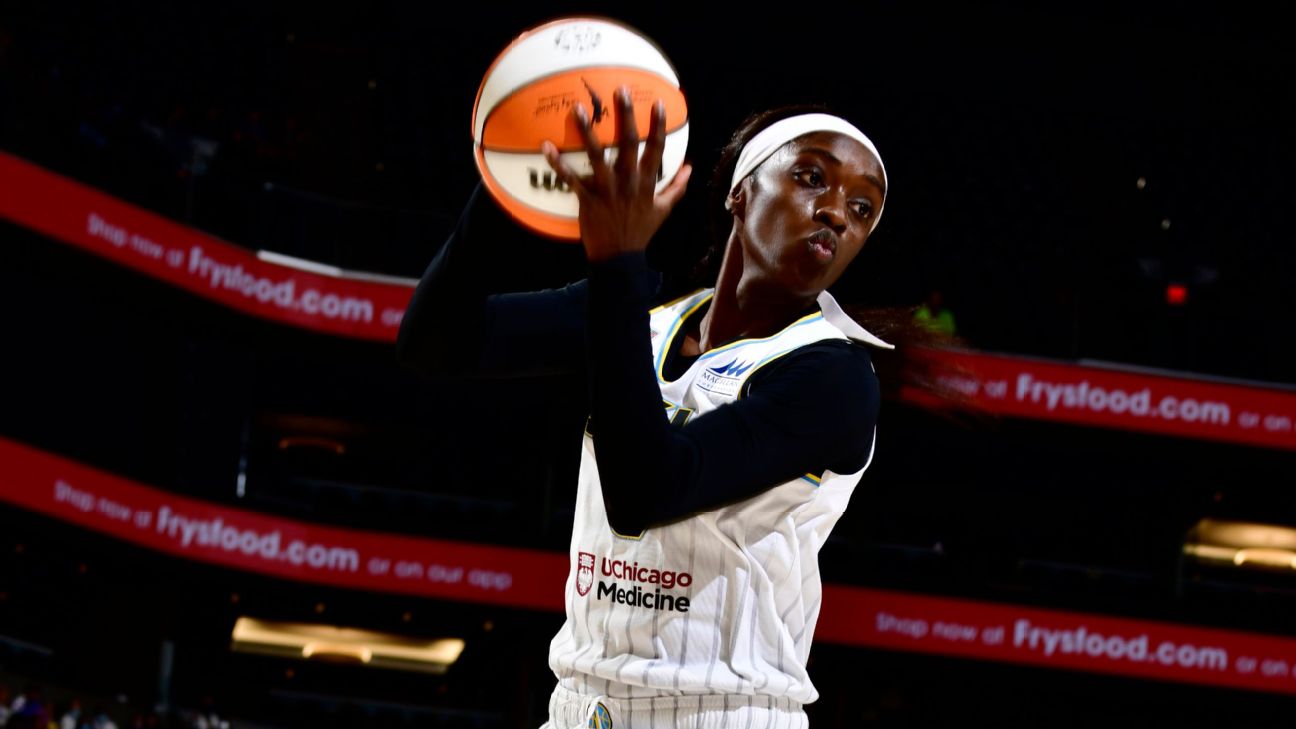 PHOENIX -- The Chicago Sky did something Sunday they didn't do on their previous trip to the WNBA Finals: win a game. And the two remaining Sky players from that 2014 appearance in the championship series -- Courtney Vandersloot and Allie Quigley -- played key roles in Chicago getting off to a 1-0 lead over the Phoenix Mercury.

Vandersloot became the first player in WNBA Finals history with at least 10 points, 10 assists, 5 rebounds and 0 turnovers. Quigley struggled a bit with her specialty, the 3-point shot, going 3-of-11 from behind the arc. Yet she was the Sky's second-leading scorer with 18 points, behind Kahleah Copper's 21.


In 2014, when the Mercury swept the Sky in the Finals, Phoenix was the league's undisputed best team. The Sky had a sub-.500 regular-season record but got hot in the playoffs. But they were overmatched in the Finals, especially when then-Sky star Elena Delle Donne was dealing with an injury.

The Sky lost those two Finals games at Phoenix by a combined 50 points, then put up a fight before falling 87-82 in the decisive third game in Chicago. That was seven years ago, and these are very different teams. But Vandersloot and Quigley haven't forgotten that disappointment.

What will that require? Here are five things we learned from Game 1 and how they could impact Game 2 at Footprint Center on Wednesday (9 p.m. ET, ESPN/ESPN App).

Nobody has found a way to stop Copper in this postseason. She's averaging 18.6 points, 5.9 rebounds and 2.4 assists in the Sky's seven playoff games -- a big reason Chicago is 6-1.

"I can't just affect the game scoring," Copper said, "because I need to get my team extra possessions on the rebounding side of it. It's also playing good defense. I think it's important for me to bring all those aspects in order for us to win."

Phoenix coach Sandy Brondello said Copper is a big worry for the Mercury.

"She's had a great playoffs. We emphasized her a fair bit in our pregame talk," Brondello said. "She got in positions where she made some shots. The team defense wasn't exactly where we needed it to be, and obviously her offensive rebounds hurt us as well."

Losing 6-foot Kia Nurse to an ACL tear and 6-1 Sophie Cunningham to a calf strain during the semifinals took a toll on the Mercury's backcourt depth. Both guards use their physicality in defending, and both can hit the 3. Nurse is out of the Finals and has a lengthy rehab ahead.


However, Cunningham -- who warmed up Sunday although she didn't get to play -- is expected back Wednesday.

Cunningham had the most important game of her WNBA career in the first round, scoring 21 points and hitting six 3-pointers in the victory over New York. She had eight points in Game 3 of the semifinals against Las Vegas, but had to leave because of the calf injury.

No one will come in and shut down Copper, but Cunningham's return at least would give the Mercury another defender to put on her.

Dolson, Stevens do their jobs

Part of playoff success can be coaches pushing the right buttons at the right time. Sky center Stefanie Dolson played a more limited role in the last two games of the semifinals than she had the rest of the season. Coach James Wade relied more on Azurá Stevens in those games; for the first time this season, she played 30-plus minutes in back-to-back games.

Yet Wade had advised Dolson to be ready for the Finals, knowing that Phoenix had 6-9 Brittney Griner and Las Vegas had 6-8 Liz Cambage.

"I told her during the last series, 'It doesn't matter who we play, you're going to be big for us the next series,'" Wade said of Dolson. "So I need for you to be locked in. She assured me she would be.

"That's how coaches are. Maybe she would have been big for us last series, but I trusted other matchups better, and that was just a judgment call. I told her also that sometimes coaches don't get it right."

In this case, Wade did get it right. Both Dolson (6-of-8 for 14 points) and Stevens (4-of-7 for 10 points, with eight rebounds) were effective in Game 1. Griner and Brianna Turner still combined for 27 points and 15 rebounds for the Mercury, but considering how difficult they've been to contain, that's not bad defense from the Sky. And the offensive contributions from Dolson and Stevens were key, too.

Parker is locked in

Candace Parker's championship experience was one of the many assets she brought to Chicago when she signed as a free agent in February. Both Wade and Copper said that Parker -- who won a WNBA title in 2016 with the Los Angeles Sparks -- didn't seem to have any pre-Finals jitters, which gave confidence to everyone else.


For her part, Parker said she did have them a little, but she has embraced her leadership role on this team. The WNBA honored several members of its "W25" team -- the top 25 players in WNBA history -- during Game 1, including Parker's former Sparks teammate Lisa Leslie, who had kudos for Parker.

With injuries forcing Parker to miss nine games this season, her overall statistics were down from last year.

"But she's been the best leader I think that she's ever been," Leslie said. "Her ability to communicate ... to teach her teammates, I think Candace has been in a role that's been awesome for her."

Leslie retired in 2009, after Parker's second season in the league. But Parker took a lot away from her brief time playing with Leslie.

"You have to be the calm for the storm, and you have to be the storm when everyone's calm," Parker said of knowing when to refocus her teammates and when to fire them up. "I've had great teammates that have been great leaders, and I've tried to take from all of them as well as my new teammates."

The Mercury have long been one of the WNBA's best offensive franchises. But they've also played some excellent defense many times this season, led by Griner and Turner inside and Skylar Diggins-Smith on the perimeter.

But on Sunday, the Mercury gave up 91 points to a Sky team that shot 52.9% from the field. While it would be hard for Phoenix to replicate the shutdown effort that held Las Vegas to 60 points in Game 3 of the semifinals, the Mercury can do better than they did Sunday. Fatigue and the loss of depth due to injuries affected that. But to try to win the title, Phoenix has to get back on track defensively. 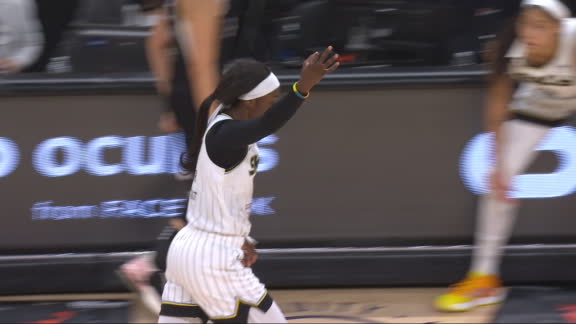 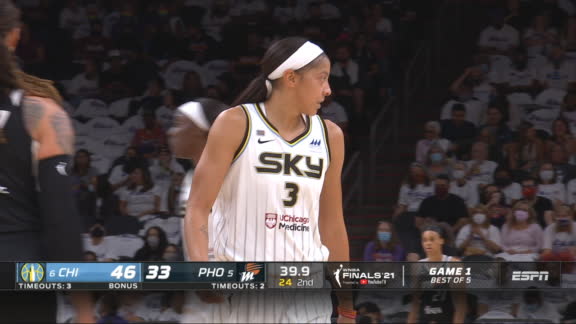 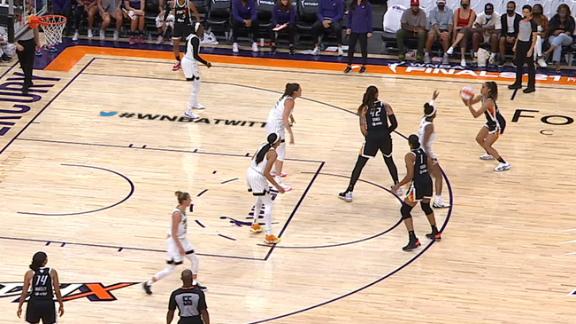