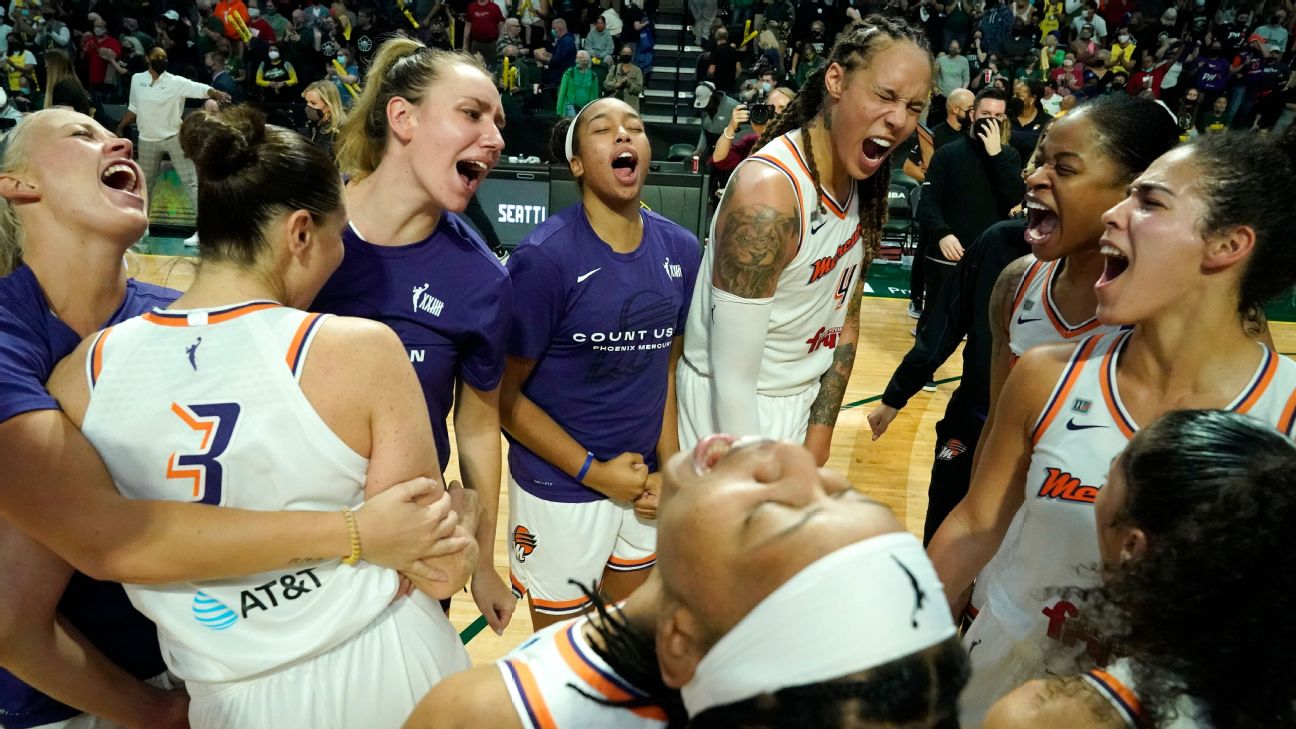 Sunday's second-round games in the 2021 WNBA playoffs delivered, with one overtime barnburner, two upsets and a whole lot of heartfelt emotion. Will we see Seattle Storm guard Sue Bird again? She said she isn't sure. And on the same day Minnesota Lynx center Sylvia Fowles won her fourth defensive player of the year award, her season ended.

Now, the No. 6-seeded Chicago Sky take on the top-seeded Connecticut Sun, and the fifth-seeded Phoenix Mercury meet the No. 2-seeded Las Vegas Aces in the best-of-five semifinals starting Tuesday (8 p.m. ET, ESPN2).


Phoenix advanced over defending champion Seattle with an 85-80 victory, but it took overtime, Diana Taurasi's return, double-doubles from Brittney Griner and Brianna Turner, a very off shooting game by Seattle's Jewell Loyd and Breanna Stewart's absence.

The Mercury are the only team left in the playoffs that has won a WNBA championship. They beat Chicago when they won the most recent of their three titles, in 2014. The Sky will try to reach the WNBA Finals again after defeating No. 3 Minnesota 89-76 Sunday.

Can anything prevent a 1-2 matchup in the WNBA Finals? The Mercury and the Sky will try. Here's a look ahead at the semifinals.

Connecticut and Las Vegas have been the favorites for a while. Do Sunday's upsets change the dynamic of the semifinals?

Voepel: These were upsets, seeding-wise, but I don't think either were huge surprises. Phoenix-Seattle as a 4-5 game was kind of a toss-up, especially with Stewart out with a foot injury. And we've said throughout most of this season that Chicago is the most unpredictable team in the WNBA: At their best, the Sky could win it all; at their worst, they can beat themselves.

All that said, Sunday's victories came on the road against two franchises that each have won four titles. That is no small thing, sending both Phoenix and Chicago into the semifinals with confidence.

Phoenix went 1-2 against Las Vegas in the regular season, but all three games were close, particularly an 84-83 loss on Sept. 19, the last day of the regular season, although that game had no impact on the seedings. If Seattle had won Sunday and had Stewart in the semifinals, that rematch of last year's WNBA Finals would have been a close matchup. Without her, perhaps not. Phoenix, especially if Taurasi can keep contributing, should provide a challenge for Las Vegas.

Chicago went 2-1 against Connecticut in the regular season, with all three games in June. Minnesota's Cheryl Reeve sounded really concerned about the Sky going into Sunday, and it wasn't coachspeak. She knew Chicago has the talent to force the game to be played in a way that benefits the Sky. That's what happened; five Sky players scored in double figures -- and Candace Parker (eight points) wasn't one of them.

Connecticut's defense has been outstanding; witness four Sun players on the WNBA's All-Defensive teams. The Sun's opponents have averaged less than 70 PPG this season; Chicago averaged 83.3 in the regular season and is at 85.0 PPG after two playoff games. It's strength against strength.

Cohen: The number one thing on my mind is how the Mercury and Sky have managed to improve between the first- and second-round games.

I agree with Mechelle that Phoenix's victory Sunday wasn't a surprise. But with Taurasi back, and Brittney Griner and Skylar Diggins-Smith playing as well as they did in the regular season, I'm starting to believe Phoenix can push Las Vegas to a full five-game series. What will make that a reality is the bench play, and if the Mercury's second-unit can keep up with the Aces'.

Now, the Sky have finally found out how good they can be, after we watched them struggle with that throughout the regular season. Chicago is such a complete team, and its ability to move the ball and score the way that it does poses a big threat to Connecticut. Will the Sky's offense give or will the Sun's defense give? What a fun matchup -- thankfully, for a minimum of three games.

Diana Taurasi played Sunday for the first time since Sept. 6. She's clearly not at 100 percent, but how will she impact the series against Las Vegas?

Cohen: The Mercury have shown they can win without Taurasi. But if they want to continue to win, they need her leadership. She is the best WNBA player ever for a reason. DT didn't have a flashy game against the Storm, but her six points in overtime show how her experience and poise in tough situations are so crucial to Phoenix winning.

I saw her grimacing throughout the game against Seattle, so I don't know if her impact against Las Vegas will come in dropping 30-plus points. Rather, it could come in hitting shots that swing the momentum back to the Mercury, or setting up her teammates for success (Taurasi averaged 4.9 APG in the regular season, second only to Diggins-Smith). As Storm coach Noelle Quinn said Sunday, "Dee gives them automatic confidence just by being on the floor."

Voepel: Sue Bird said it best after the Storm's loss to Phoenix: It was clear that Taurasi wasn't moving as well as normal and that she was in some pain, so Seattle tried to take advantage of that.

But when the player who has scored more points and hit more 3-pointers than anyone in league history is on the court, your defense can't afford to cheat that much off her -- even if she is a bit hobbled.

"We tried to make her do things she didn't want to do," Bird said of Taurasi. "I think what happened in overtime was we just made a couple mistakes that gave her two open shots. And you can't give a player like that an open look whether they are on half a leg or not. That's who she is, and it's no surprise. That's why you can't make those mistakes."

Phoenix coach Sandy Brondello said that Taurasi is the Mercury's best passer -- and one of the best passers ever in the WNBA. So even when she's not a threat to score, she fuels the offense. She's also the teammate who has the most impact on center Brittney Griner, who feeds off Taurasi's energy, praise and admonishments. Griner has been so good this season, but having Taurasi on the floor with her makes her better.

What's the key matchup that will determine the Chicago-Connecticut series?

Voepel: The guard matchup is going to be crucial. The 6-foot-4 Parker and Connecticut's 6-6 Jonquel Jones are superstar-level players inside and outside. But can the Sky's guards be as effective against Connecticut's perimeter defense as they were against Minnesota? Sky starters Courtney Vandersloot and Allie Quigley and reserve Diamond DeShields combined for 44 points Sunday. And guard/forward Kahleah Copper, who had 23 points in the first round vs. Dallas, had 16 points, 10 rebounds and four assists vs. Minnesota.

The Sun take great pride in taking apart offenses. But in their two victories over Connecticut this season, the Sky scored 91 and 81 points. Sun guards Briann January and Jasmine Thomas were both on the WNBA all-defensive teams, so they will be trying to disrupt the Sky as much as possible.

Cohen: It's Parker vs. everybody. Even when she isn't the team's top scorer, Parker as the team's facilitator impacts the game in other ways, be it with her defense in the paint or her ball handling. If Parker is able to be the leader and the facilitator that carried Chicago to the semifinals, there's a real chance the Sky could at least push the Sun to a full five-game series.

What will decide the Phoenix-Las Vegas semifinal matchup?

Voepel: Las Vegas didn't play Sunday, but a lot of people were talking about the Aces on social media. Despite being second in the league in defensive rating this season, none of their players made the all-defensive teams -- decided by media vote this year rather than coaches. So if the Aces are mad at anyone for their omission, they can be mad at the media. But they might also take it out on their opponents.

Liz Cambage, the Aces' 6-8 center, returned in the regular-season finale after being out with COVID-19. She and 6-4 A'ja Wilson are skilled and take up a lot of space inside. Same for 6-3 Kiah Stokes, a good pickup for the Aces in early July after she was waived by New York. She has made her living in the WNBA with her defense. And the 6-3 Dearica Hamby and 6-foot Jackie Young can guard just about anyone on the perimeter or inside.

The Mercury averaged 82.1 PPG in the regular season and 84.0 in two playoff games. The Aces allowed opponents an average of 80.2 points -- but averaged a league-best 89.3 themselves. Las Vegas' defense might not be as stingy as Connecticut's, but it's still pretty good. Phoenix can't afford big draughts against Las Vegas, because the Aces can run away from teams and then not allow comebacks.

Considering Griner has been at MVP level this season, this series will show how much progress Cambage has made with conditioning after being ill. Griner is 6-9, and Cambage is one of the very few players who can match up with her physically. In the regular season, Griner had 33 points and 10 rebounds and 27 and 11 in the two meetings with Las Vegas in which she played most of the game. Because the regular-season finale had no impact on playoff seedings, she played just over 14 minutes and was limited to six points and four rebounds. That one can be tossed out. The first two indicate how well Griner can play against the Aces, and that has to be a concern for them.

Cohen: It might come down to how good Griner can be. Yes, their game in the regular-season finale didn't mean anything, but Griner shot just 2-for-7 from the floor. And that was with Cambage playing less than 10 minutes. That matchup inside at the rim -- and how Griner's teammates respond to double teams or potential struggles -- will make or break the Mercury. Because the Aces offense is so good, as is their defense, the Mercury can't afford to make any mistakes.

Which team are you picking to win each semifinal series, and why?

Voepel: Connecticut and Las Vegas are the Nos. 1-2 seeds for good reasons. I see both advancing to the WNBA Finals, which will mean the league will have a first-time champion. I'll say both series go four games.

Cohen: Connecticut and Las Vegas are both just so, so good -- and have been consistently good all season. However, I think the Sun have to win in five, and the Aces win in four. 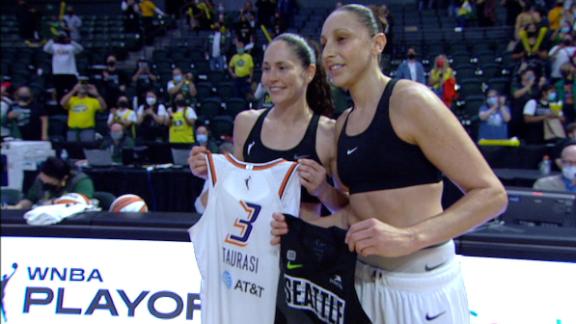 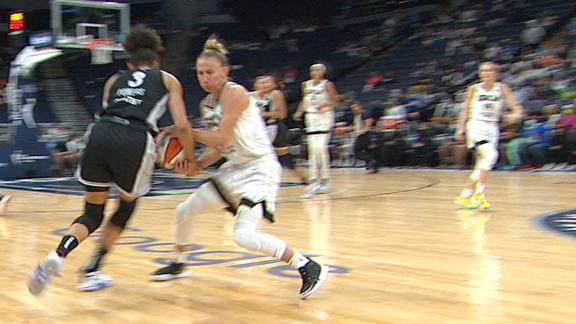