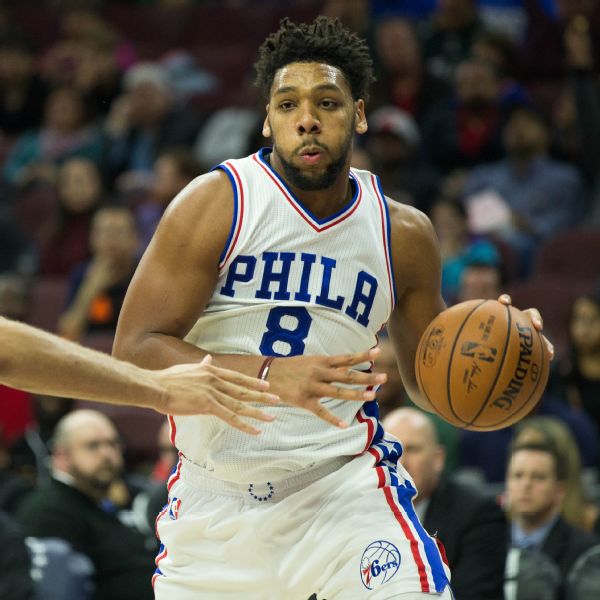 76ers coach Brett Brown said after Saturday's 117-109 victory over the Heat that center Jahlil Okafor was held out of the game because of a potential trade.

League sources told ESPN that trade talks ramped up Saturday to the point where the Sixers were moved to prevent Okafor from playing. However, no deal appeared imminent as of Saturday night.

The Pelicans and Sixers have been engaged in serious trade talkscentered around Okafor all week, but Philadelphia is believed to be talking to other teams, as well, reportedly including the Trail Blazers and Bulls.

"As the All-Star break gets closer, possible deals have more of a chance,'' Brown said. "Although speculation is rampant all throughout stuff, you learn as the deadline gets closer, the reality that something could happen goes to a higher level.''

Asked if he would continue to sit Okafor while rumors swirl, Brown said, "It's still fluid but if you see me not play him, that's probably the reason.''

Okafor, the second-year center out of Duke, is averaging 11.6 points and 4.8 rebounds this season.

Brown said Okafor handled the decision well, but the coach admitted the unique situation is difficult to deal with emotionally.

"You feel conflicted, tremendously conflicted because you've spent a lot of time with these guys and they're very young," Brown said, according to CSNPhilly.com. "I hope that when they seek guidance, I give them good advice. Trying to coach them and educate them and make them aware that this will always be a part of your NBA life and it's at many times no reflection of the individual. It's part of just the normal drumbeat of an NBA season and you're not going to find many people that stay with one team their whole career.

"To find ways to say that, do that and know at some point somebody could come in and say he's not a part of your team anymore, there's a human side to all of that. I have an affection for Jahlil Okafor. I have a far greater respect for him than I had at the start of the year and it was high. I just see a human being in there that handles it with all class."

Okafor is part of the 76ers' young core, but one that has been without rookie Ben Simmons all season and minus star center Joel Embiid the past nine games due to a knee injury.

Nevertheless, Philly has been one of the NBA's big surprises in 2016-17. It moved to 20-34 with Saturday night's win over Miami, which entered the contest on a league-best, 13-game winning streak.