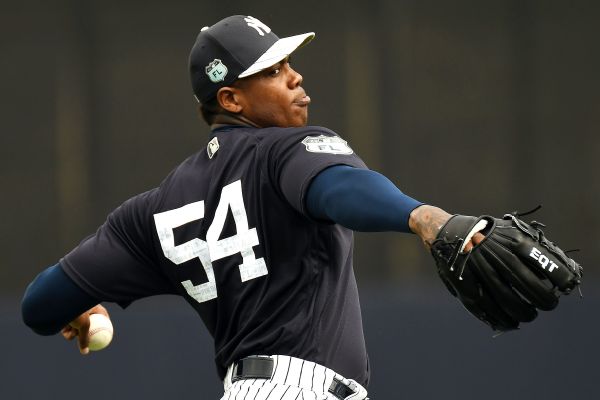 ESPN
By Jesse Rogers
CHICAGO -- The Cubs gave out two more World Series rings, including one to former closer Aroldis Chapman, who returned to Wrigley Field for the first time since the team broke its 108-year championship drought.

"It's exciting, because that means the team thinks I deserve that, to get my ring in front all the fans and my former teammates," Chapman said. "That makes me feel very happy."

Standing near home plate, Chapman received his ring from Cubs brass, including manager Joe Maddon. Then Chapman greeted his former teammates, who encouraged him to take the ring out of the box and put it on.

Before the on-field ceremony, team president Theo Epstein and general manager Jed Hoyer made their way into the visiting bullpen to present former Cubs reliever Adam Warren with his ring. The Yankees traded Warren to the Cubs before last season in the deal that landed Starlin Castro in New York. The Cubs then sent Warren back to the Yankees when they acquired Chapman.

"First class," Warren said. "Very honored to get it. I was kind of speechless when they gave it. It was an honor to be part of that special season."

Warren chose a private moment to receive his ring, as he wasn't a member of the Cubs when they actually won the World Series and he wanted Chapman to have his moment in the spotlight.

"You work so hard for a ring. Unfortunately, I wasn't part of winning it," Warren said. "To be honored as part of that team is special to me."

Hoyer indicated the team has two rings left to give out. Popular center fielder Dexter Fowler will get his in a pregame ceremony when the St. Louis Cardinals visit Wrigley Field next month. The team isn't sure if it will wait until playing the Toronto Blue Jays to give Chris Coghlan his ring. The teams don't meet until late in the season.

"It's a little weird giving out rings in September," Hoyer quipped.

As for any disagreements between Maddon and Chapman about how the reliever was used last postseason, the lefty said it was blown out of proportion. He was called upon often, but he knew what was at stake.

"I feel like sometimes some media members are looking for things to be controversial between Joe Maddon and I, where there is no controversy," Chapman told ESPN's Marly Rivera. "I think it comes from an offseason interview, where they asked me what I thought of the way he used me [in the playoffs]. I said what I thought, but I have nothing against my former manager.

"He did his job and I did mine. At that moment, I was a warrior, and I was there to listen to where my captain told me to go; that's what I did. I have nothing against him. On the contrary, he was one of the people who lent me his trust and embraced me when I first came to the team."
Related topics:
sportsespnstarlin castroworld seriesmlbringsaroldis chapmanst louis cardinalsnew york yankeeschris coghlanadam warrentoronto blue jayschicago cubsdexter fowler
Copyright © 2020 ESPN Internet Ventures. All rights reserved.
More Videos
From CNN Newsource affiliates
TOP STORIES