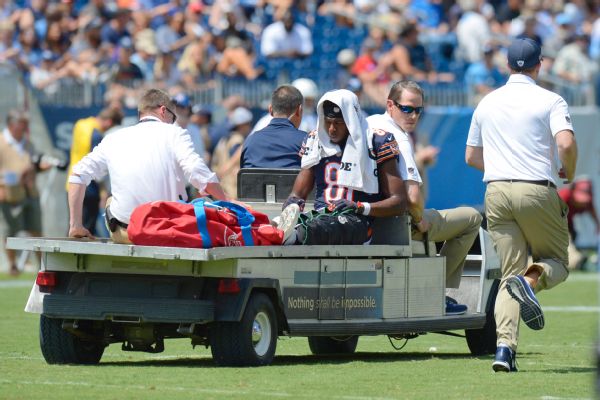 Chicago Bears wide receiver Cameron Meredith has a torn ACL in his left knee, with doctors indicating he could be ready for organized team activities next year, a source told ESPN's Josina Anderson.

Meredith also has damage to other ligaments in his knee and will undergo ACL replacement, a source told Anderson.

Meredith was injured during the first quarter of last Sunday's preseason game at the Tennessee Titans. He was carted off the field after being tackled low by safety Johnathan Cyprien at the end of a 16-yard reception. Meredith's left leg twisted upon contact as he braced for the hit.

He was writhing in pain for a few minutes before being helped onto a cart with an air cast supporting his left leg.

He had missed a portion of the Bears' offseason program after tearing ligaments in his thumb, but the 6-foot-3 receiver returned for training camp and appeared to develop strong chemistry with starting quarterback Mike Glennon.