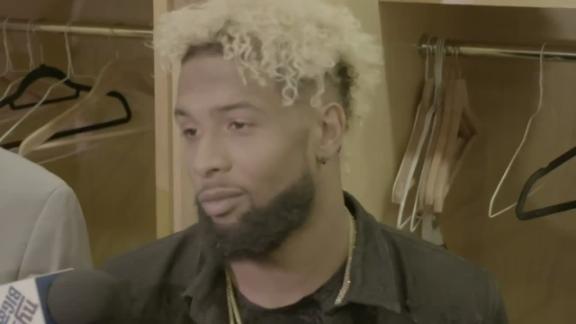 ESPN
By Jordan Raanan
EAST RUTHERFORD, N.J. -- Odell Beckham Jr.'s slamming of his helmet against the kicking net, the prancing up and down the sideline, the ranting and raving at nobody in particular -- it's all a bit much for New York Giants coach Ben McAdoo.

McAdoo said he wants to see his Pro Bowl wide receiver "become less of a distraction" so the team's efforts and energy can be singularly concentrated on winning football games.

McAdoo twice had conversations on the sideline with Beckham during Sunday's 29-27 loss to the Washington Redskins at MetLife Stadium. Beckham was matched against rival cornerback Josh Norman most of the afternoon in their first meeting since last year's ugly confrontation.

"[Beckham] needs to control his emotions better and become less of a distraction to himself and to his teammates," McAdoo said Monday on a conference call with reporters. "It's our job to help him with that process and maturing."

Beckham has been fined five times in less than three seasons, and he received a suspension for his actions last year against Norman. McAdoo said it's on him, his coaches and Beckham's teammates to help focus Beckham's emotions in the proper direction.

"It takes a village," McAdoo said. "It takes time."

Beckham had 7 catches on 11 targets for 121 yards on Sunday. He almost appeared to be in tears after the contest.

Beckham is an admittedly emotional player. He recently compared himself to NBA All-Star Russell Westbrook. He said his intensity is part of what makes him one of the NFL's top wide receivers.

"Have you ever watched Russell Westbrook play basketball? He plays with a lot of emotion or passion, whatever you want to call it," Beckham said last week. "It's what's best for some players and what's not best for some players. You use it and just be smart. Play smart. It's football at the end of the day."

It can become a distraction. McAdoo and quarterback Eli Manning each spent part of this past Sunday tending to Beckham on the sideline. That time could have perhaps been better utilized looking at pictures, discussing past and future plays or anything game-related aside from cooling down their top offensive weapon.

Beckham stormed off the field Sunday after a fourth-quarter interception and slammed his helmet against the kicking net. In a karmic twist, it snapped back and slammed into the side of his face. Beckham had a scratch on his face after the game. He said he didn't remember how it happened.

Beckham was also seen yelling and stomping along the sideline throughout the contest.

McAdoo said he's dealt with similar emotional players in the past. The teams he's been a part of have been able to corral those emotions.

"The same way. Communication. Having a variety of different people, coaches, staff members to communicate with," McAdoo said. "Just help him direct his focus."

Beckham didn't see a problem with his emotions on Sunday. He didn't think they were out of character.

OBJ doesn't remember much about game
Giants wide receiver Odell Beckham Jr. has trouble recounting parts of his team's loss to the Redskins, but he does explain he is surprised he did not get thrown out of the game on one particular play.
Related topics:
sportsespnnflodell beckham jreli manningnew york giants
Copyright © 2020 ESPN Internet Ventures. All rights reserved.
More Videos
From CNN Newsource affiliates
TOP STORIES