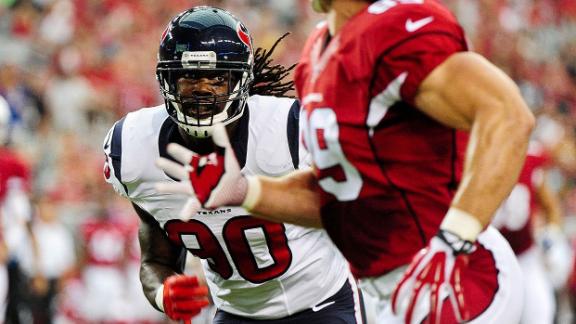 HOUSTON -- Whatever the external conversation about Texans outside linebacker Jadeveon Clowney, his coach wanted one thing understood on Monday.

"This guy has worked extremely hard to recover from injuries," Texans coach Bill O'Brien said. "And I want to be real clear about this with him, as it relates to us here to the Houston Texans. We think very highly of him. We know he's going to be a really good player. He's been unlucky. I don't really care what anybody thinks about what I say in that realm of being unlucky or lucky. He's had a sports hernia, he's had a concussion and now he's dealing with a knee injury. Those things are not easy in your rookie year."

Clowney did not play Sunday against the Tennessee Titans, having suffered a setback in his surgically repaired right knee. He had arthroscopic knee surgery in September after suffering a torn meniscus in the team's season opener. The knee was swelling and causing a great deal of pain.

Clowney was the Texans' first overall pick in May out of the University of South Carolina. He had sports hernia surgery in June shortly after signing his rookie contract. Upon returning, Clowney showed off his ability in the Texans' second preseason game, but suffered a concussion the following week after a head-to-head collision with Denver Broncos tight end Jacob Tamme during a joint practice in Colorado.

Clowney missed two weeks with that injury and returned in time for the Texans' season opener. The Texans started Whitney Mercilus, a 2012 first-round pick, in Clowney's place and Mercilus earned the right to keep that starting role even after Clowney returned.

So far, the Texans rookie has missed eight games and seen limited playing time in the games he has played. Clowney got his most significant playing time two weeks ago against the Cincinnati Bengals, when he played 49 snaps.

"He's in here every day working extremely hard to get better," O'Brien said. "He's definitely day to day, we'll have to see how he feels and take him out there and run and see if he can cut and do some of the things that really make him the player that he is. He'll be honest with us. He's a good kid. He's a good teammate. He's working hard to get back out on the field."