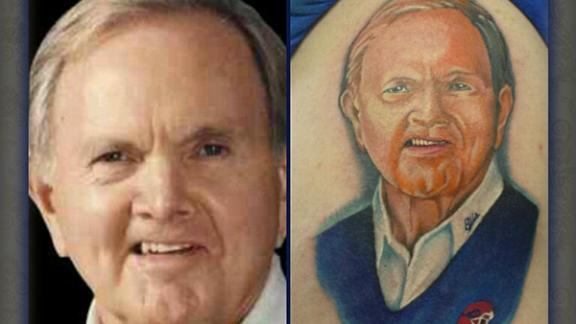 Fans have decorated their bodies with tattoos of team logos and even images of players, but 32-year-old Buffalo Bills fan Jack Meredith might be the first sports fan to get a tattoo of his team's owner.

The season ticket holder from upstate New York said he went to a tattoo parlor on Saturday and got his right arm inked with an image of the team's late owner Ralph Wilson Jr., who died at the age of 95 in March.

"We wouldn't have the team without him," Meredith told ESPN.com. "And so I felt it would be nice to pay tribute to him."

Meredith, a general manager of a car dealership, said those who have seen the tattoo, especially those on social media, have had mixed reviews.

The Wilson tattoo is Meredith's second tattoo, joining the Bills logo on his left arm. Meredith, who travels two and a half hours each way for Bills home game, says the Wilson tattoo will soon be joined by an image of former Bills quarterback Jim Kelly. He said he plans to get that tattoo next month.